Wellbeing of children in SA is vital for a brighter future

The old African proverb, “It takes a village to raise a child”, has often been quoted to emphasise what it takes to raise a successful and well-rounded child into adulthood. Raising a child requires attention to their inner and outer growth at every phase of their lives. However, when measuring the overall wellbeing of children, it is important to consider factors such as their economic, educational and health status in order ensure healthy outcomes and a bright future.

According to a report released by Statistics South Africa (Stats SA), “Children’s education and well-being in South Africa, 2018”, more than half (62,3%) of the child population aged 0-17 lived in low-income situations, and children in female-headed households were more likely to live under these conditions. More than two-thirds (68,2%) of children aged 0-17 received the child support grant in 2018, and most of them were Eastern Cape residents (79,9%) followed by Limpopo (78,5%).

South Africa’s has very good education policies and funding which guarantee universal access and completion of both primary and secondary education. While the MDGs recorded near universal attendance and completion of primary education, grade repetition, especially among male learners at primary school, was a challenge. The primary education phase includes most of the grades of compulsory education (Grade 1 to 7 out of Grade 1 to 9), which explains the high rate of attendance. Most children in South Africa start Grade 1 at age six or seven.  In 2018, the number of children aged 6–13 who were attending primary school was estimated at 8,2 million, whereas 730 423 children in this age group were attending other phases of schooling, including secondary schooling. Furthermore, 97 836 children in the age group 6–13 were estimated to be out-of-school children. For some young children, the reason for their non-attendance was due to delays in their entry into formal education.

South Africa’s effort in expanding children’s access to education has primarily benefitted school-age children, as close to 99% of children aged 6-13 and 96% of children aged 14-17 attended school in 2018.  In the age group 3 to 6 years old, which encompasses children who ought to be in pre-school, Grade R and in the first year of primary school, around 43% of three-year-olds, close to 30% of four-year-olds, close to 13% of five-year-olds and three per cent of six-year-olds were not in educational institutions in 2018. Regional inequalities, as well as population group inequities in school attendance, still persist among children in South Africa. 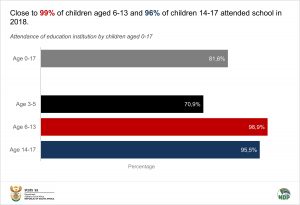 The analysis presented in this report is intended to provide a better understanding of why and how children’s well-being and educational opportunities are changing in South Africa. It provides information that can be used as a basis to address issues related to child development. In developed countries, adequate direct investment in the lives of children have proven to have significant and sustained effects on the development of future generations and society as a whole. Programmes related to services such as education and welfare require analysis within the age structure and distribution of the population, so that programmes may be tailored to meet the needs of the intended recipients or targeted to specific groups.