Economy stumbles in the first quarter

The South African economy slumped sharply in the first three months of 2019, contracting by 3,2%.1 Seven of the ten industries took a knock, with manufacturing, mining and trade the biggest contributors to the fall. Construction, mining and trade are in recession.

The 3,2% decline is the biggest quarterly fall in economic activity since the first quarter of 2009, when the economy – under strain from the global financial crisis – tumbled by 6,1%.

The manufacturing industry was the biggest drag on growth in the first quarter of 2019, falling by 8,8%. This was driven mostly by declines in petroleum, transport and wood and paper (click on the image to enlarge). 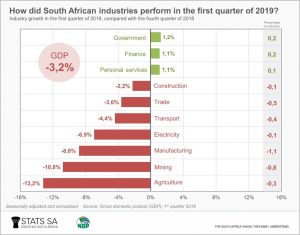 Mining failed to lift itself out of recession, registering its third consecutive quarter of negative growth. A fall-off in diamond, iron ore and coal production pulled the industry down by 10,8%. This is mining’s biggest decline since the first quarter of 2016.

Weaker wholesale, retail and motor sales dragged the trade industry down by 3,6%. South Africa’s trade industry is now in recession, this being its second consecutive quarter of negative growth.

Agriculture production slumped by 13,2% after registering a 7,9% rise in activity in the fourth quarter of 2018. A slowdown in the production of field crops (wheat, sunflower seeds, and tobacco) and horticultural products (vegetables, citrus and deciduous fruits) weakened performance in the first quarter.

Construction entered its third consecutive quarter of negative growth, slipping by 2,2%. Decreases were reported for activities related to residential and non-residential buildings, as well as construction works.

On the employment front, the construction industry shed 142 000 jobs in the first quarter compared with the fourth quarter of 2018, contributing over half of the 237 000 jobs lost across the entire economy.2

Government, finance and personal services were the three industries that posted positive growth figures, keeping their heads above water in the first quarter. Government activity expanded by 1,2%, mostly as a result of increased civil service employment contracts related to the run-up to the general election. Finance and business services, the largest industry in the South African economy, edged up 1,1%, and personal services also expanded by 1,1%.

Key facts from the GDP release for the first quarter of 2019:

1 All growth rates are quarter-on-quarter, seasonally adjusted and annualised, and in real (volume) terms.