The Investing in African Mining Indaba, the world’s largest mining conference, ended a week ago in Cape Town. Investment promises made at the conference might have a positive impact on the future of the industry. Stats SA takes a look at how mining fared in 2018.

Mining had a lacklustre year. Production fell by 1,6% in 2018 compared with 2017, down from the 3,9% rise in 2017. Gold, copper and iron ore were the biggest drags on activity in 2018, according to Stats SA’s most recent Mining: production and sales release1.

Gold continued its long-term decline with a 14,5% drop in production in 2018, the biggest annual slump since 2008 when production tumbled by 16,2%. Strike action during the year contributed to the fall in activity in 2018.

Once South Africa’s most beloved precious metal, gold production has steadily declined over the last few decades. In the last 20 years, gold miners have only seen two years of positive annual growth (in 2002 and 2013). South Africa produced 83% less gold in 2018 than it did in 1980.

More recently, Sibanye-Stillwater announced that it would start the process of restructuring a number of its gold mines, with a potential loss of up to 6 670 jobs4.

Copper production fell by 28,5% in 2018. This is the biggest annual fall on record since 1981, the year Stats SA started publishing growth figures in the current series. Iron ore was the third largest contributor to mining’s slump in 2018, falling by 2,3%.

Diamonds, chromium, manganese, and platinum group metals (PGMs) just managed to keep their heads above water, though. South African diamond production climbed by 7,7% in 2018, the fourth consecutive year of positive growth for the precious stone.

In his address at the Investing in African Mining Indaba, President Cyril Ramaphosa reiterated government’s commitment to creating an enabling environment for mining investors5. With the renewed vigour and commitment amongst industry players, the country will be keeping a close eye on mining’s performance in 2019. 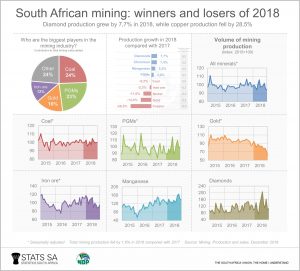