Looking for love in all the wrong places?

Don’t despair. There is hope. We promise. Finding that special someone to spend Valentine’s Day with has just become a little bit easier. From left field in the realm of dating advice enter the statisticians, who combine data and geography to show you where you can look for love.

Surprised? Well, consider the fact that Stats SA has marital status data for individuals on a street-block level, from the last population census1. Mix these data up in a cauldron of computer software and add some nifty analysis (the details are not important here; finding your love is) and voilà!: maps of our three largest cities showing where the unmarried are2. 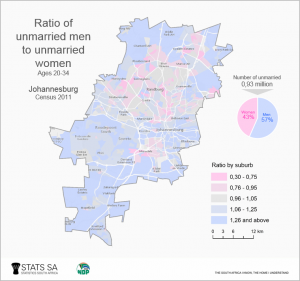 Examples of suburbs that have a high concentration of unmarried women in Johannesburg include Meredale, Cottesloe, Melrose, Robin Hills and Rossmore,

What about men? There is a slight sticking point that we should mention. A few of the census sub-places that pop up in this analysis as having the highest concentration of unmarried men compared with women are … prisons. A deal breaker, no?

Other areas that have high ratios of unmarried men are rehab centres, mines and industrial areas. Hospitals tend to have high concentrations of unmarried women. As you might have had some expectation of meeting your future partner at a benign place like a squash club, we thought it best (and safer?) to stick to suburban areas in the listings below.

Droste Park, George Goch, Denver and Riverbend AH are examples of suburbs in Johannesburg that have more unmarried men than women.

If Johannesburg is not your playground though, you might consider the following cities instead. 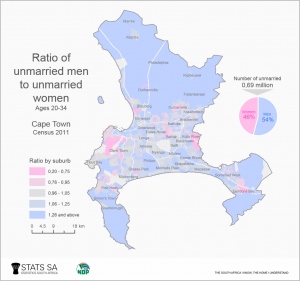 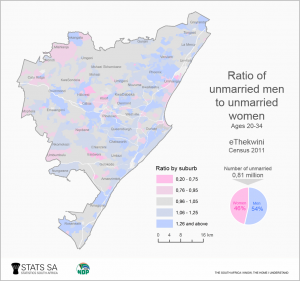 So next time you are looking for love, consider the computations and calculations of the humble statistician.

1 These data are from Census 2011. You might be wondering why we are using data that are six years old. Census 2011 is the latest dataset that South Africa has that provides demographic data down to street-block level for the entire country. Due to its high cost, a census takes place once every 10 years. The next census is due for 2021.

2 The unmarried include the widowed, separated, divorced and those who have never married.

3 The creation of these maps was inspired by similar analysis done on New York (see here).

4 The area names on the maps are main place names. The data, however, are rendered on a sub-place (suburb) level.