What municipalities say about service delivery: the supply-side approach

Not as widely known is that service delivery can also be measured from the supply side. Municipalities (the suppliers) furnish service delivery related data to Stats SA during the annual Non-financial census of municipalities survey. The latest survey report, for the financial year ended 30 June 2015, provides information on the extent of provision of basic services and free basic services, compliance to certain minimum standards, vacancies in municipal departments, and the number of indigent households1.

Municipalities provide a wide range of services. Basic services are those services that, if not provided, would endanger public health or safety. These include water, electricity, sewerage & sanitation, and solid waste management. The chart below shows that the number of consumer units2 receiving the four services has climbed over the last five years. 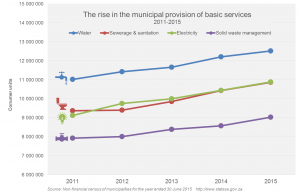 In 2000, Cabinet announced government`s intention to roll out a free basic services programme to poor (or indigent) households. The objective of the indigent policy is to alleviate poverty in economically disadvantaged communities by providing free basic water (at least 6 kilolitres per month per household), free basic electricity (at least 50 kWh per month per household), and subsidised sewerage and sanitation as well as solid waste management (up to an average of R50 per month or 100% subsidy to indigent households).

2,7 million consumer units received free basic electricity from municipalities during the 2014/15 financial year, with the largest annual percentage increases recorded by municipalities in KwaZulu-Natal (18,4%) and Gauteng (13,3%). Over a five-year period, Gauteng had the largest percentage increase in consumer units receiving free basic electricity (from 344 709 in 2011 to 888 748 in 2015). On a local government level, Johannesburg reported the highest increase, from 130 000 in 2011 to 427 688 in 2015.

The provision of free basic solid waste management to consumer units dropped nationally by 2,3% in 2014/15, with the largest percentage decreases recorded in North West (-13,1%) and Western Cape (-10,2%).