The public-sector: Shy on infrastructure investment

Data from 745 institutions provides an update on public-sector investment in infrastructure. A number of institutions pulled back on capital expenditure in 2021, while others increased their spending.

The contraction in 2021 was due to a sharp slump in spending by public corporations and extra-budgetary accounts & funds (EBAs), with a smaller decrease by national government (Figure 1). 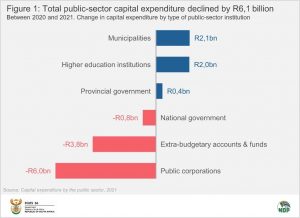 The public corporations of Eskom and Transnet recorded the largest decreases in 2021 (Figure 2). Eskom cut back on capital expenditure by R4,2 billion, from R36,4 billion in 2020 to R32,2 billion in 2021. This was a conscious effort by the utility to meet its liquidity requirements through effective cost management and deferral of capital expenditure. Capital spending in 2021 was mainly on the Medupi and Kusile power stations, and on large transmission projects.

Transnet cut back on capital projects by R3,0 billion, mainly due to disruptions caused by the COVID-19 lockdown. 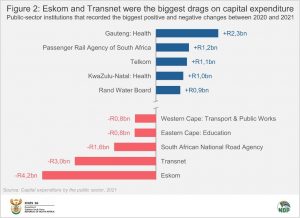 The lockdown also had an impact on the South African National Road Agency (SANRAL), causing delays in road maintenance projects. Despite the cut in capital expenditure by R1,6 billion, SANRAL spent R3,9 billion in 2021, mainly on improvements to network capacity and on upgrades to a section of the N3 highway between the Cato Ridge and Dardanelles interchanges.

The Gauteng Department of Health expanded capital spending by R2,3 billion, mainly on building-related work at Hellen Joseph Hospital. The Passenger Rail Agency of South Africa also recorded a rise in capital expenditure as it finalised the procurement of locomotives.

Focusing on the smaller players who contributed positively, South Africa’s 257 municipalities increased capital spending by R2,1 billion between 2020 and 2021. Projects in the City of Johannesburg (Figure 3) included the development of routes for the Rea Vaya Bus Rapid Transit system between Johannesburg CBD, Alexandra and Sandton CBD. 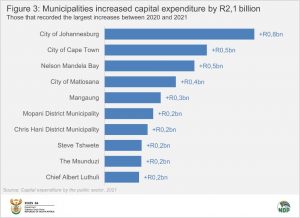 The City of Cape Town focused on upgrading roads in Gugulethu and Heideveld. The municipality also conducted work on an elevator shaft at the city hall. 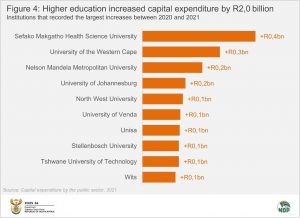 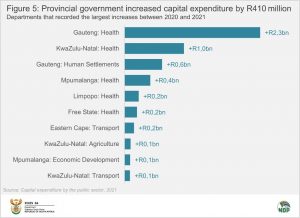 The rise recorded by the Gauteng Department of Human Settlements was mainly due to the acquisition of land for human settlement development.

For more information, download the latest Capital expenditure by the public sector, 2021 statistical releases and unit data in Excel here.