The 2,8% rise is muted compared with the previous three years that recorded increases of around 7,0%. A closer look at the data reveals that the expenditure growth in 2020/21 was driven by increases in goods and services and compensation of employees, with small positive contributions recorded for social benefits and interest (Figure 1). On the downside, provincial government spent less on subsidies, grants and other payments. 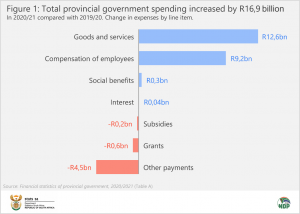 The three biggest movers in Figure 1 are explored further below.

All provincial governments reported a rise in goods and services, with the exception of Mpumalanga. The country’s place-of-the-rising-sun province recorded a decline on the back of reduced spending on property maintenance and repairs.

Spending on compensation of employees increased in eight of the nine provinces, rising in aggregate by R9,2 billion in 2020/21. Limpopo province was the exception, recording a decline of 0,8%. The overall increase was mainly driven by an upswing in salary payments, as well as the creation of new posts for healthcare professionals to aid in the fight against COVID-19.

A summary of staff numbers, drawn from the annual reports, shows an increase in the number of filled public healthcare posts across most provinces between 2019/20 and 2020/21, with the exception of Free State and Limpopo that recorded losses.

The other payments line item3 decreased by R4,5 billion between 2019/20 and 2020/21, with Western Cape the only province registering an increase. The overall decline was mainly due to a delay in payments of human settlement grants to households. Government officials reported difficulties in contacting housing beneficiaries under the restrictions imposed by lockdown regulations.

This is one of several annual releases on government finances published by Stats SA. Releases for 2020/21 are available for national government and extra-budgetary accounts and funds. A release for higher education institutions is due on 27 October 2022. A consolidated release, which incorporates data from these publications, will be available on 30 November 2022. So watch this space!