Don’t throw in the towel!

Your chances of finding a job are much higher if you continue your search for employment. 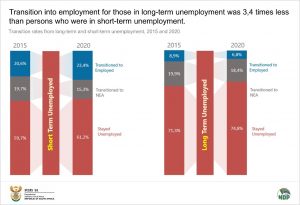 Is the decrease in likelihood of finding a job due to factors such as a loss of skill as a result of being jobless or out of work? Are employers biased towards those that have been unemployed for longer periods?  Are there other socio-demographic factors that make it more difficult for job seekers to obtain work?

Labour market transitions, that is, the mobility of workers between jobs and in and out of employment, play an important role in policy discussions surrounding the future of work. The Centenary Declaration for the Future of Work, adopted in June 2019 at the International Labour Conference (ILC), calls for “effective measures to support people through the transitions they will face throughout their working lives” as well as “promoting the transition from the informal to the formal sector economy while giving due attention to rural areas”1.

Being discouraged due to the unavailability of jobs in the area, or the inability to find work requiring the skills held by individuals, or the hopelessness of finding work, might play a role in not obtaining work after an extensive period of unemployment. About 5,9% of those who were discouraged in Q3:2020 found employment in the following quarter compared to 11,9% of those who were looking and available to work.
Transition rates into employment for the unemployed and the discouraged, 2020 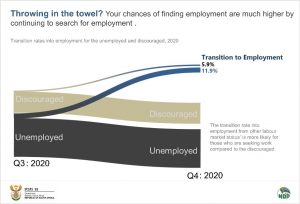 Unemployed females are less likely to move into employment than males, with only 4,9% having moved into employment in Q4:2020 compared to Q3:2020.  About 7,1% of their male counterparts found a job after being unemployed in the previous quarter.

In South Africa, unemployment is disproportionally higher among young people relative to the average working population. In addition, prior work experience and higher levels of education or training have consistently been associated with the successful transition into employment, as they improve the chances of finding a job. While improving educational outcomes remains crucial to reducing unemployment, having work experience also improves the chances of securing employment. 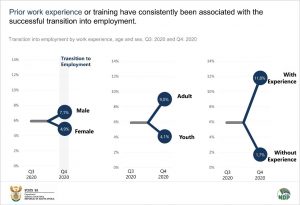