This is the third time in five months that the annual rate was 5,9%, testing the 6% upper limit of the South African Reserve Bank’s monetary policy target range. The last time that headline inflation was above the target range was five years ago, when the rate was 6,1% in March 2017. 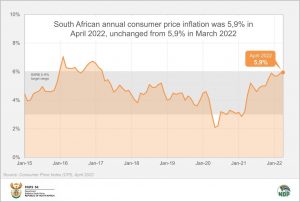 Other running costs, which includes car services and spare parts, recorded a rise of 2,1% between March and April. Increases were recorded for car services (up 6,4%), car batteries (up 2,3%) and tyres (up 1,2%).

Your coffee just became that much more expensive too. Significant monthly increases were recorded for ground coffee (up 2,4%) and instant coffee (up 2,1%) in April, with cappuccino sachets recording a rise of 1,0%. Black tea prices increased on average by 0,6%, but Rooibos tea declined slightly by 0,2%. 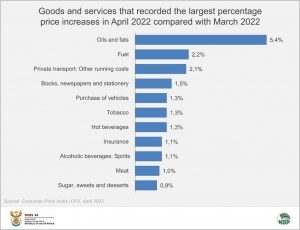