The South African National Roads Agency Limited (SANRAL) and the Gautrain Management Agency were two of five transport institutions that cut spending in 2018/19.

SANRAL was the major contributor to this decrease, recording a R1,8 billion fall in expenditure as it cut spending on road construction. The Transport Education and Training Authority – responsible for developing skills in the transport sector – spent less on goods and services, reducing its own expenditure by R91 million.

The Roads Agency Limpopo and the Mayibuye Transport Corporation also cut back spending in the 2018/19 fiscal year (click on the image to enlarge). 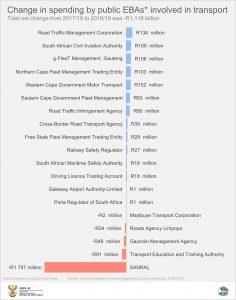 EBAs are public entities that are involved in delivering services to government or to the public on behalf of government. In the 2018/19 fiscal year, there were 255 EBAs in total. Notable examples include the South African Revenue Service and the Road Accident Fund.

Who are the biggest players?

Amongst the 19 EBAs involved in transport, SANRAL remained the biggest spender in 2018/19. This is despite the cut in its expenditure. The agency spent almost R20 billion, followed by the Gautrain Management Agency with R2,1 billion. 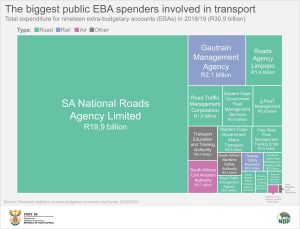 SANRAL is one of twelve EBAs involved in road transport activities. Total spending for this group amounted to R26,5 billion, followed by activities related to rail (R2,4 billion) and air travel (R765 million).2

You might be wondering about air travel in terms of where South African Airways and the Airports Company South Africa might fit in. These two institutions are classified as public corporations and not extra-budgetary accounts, so they don’t appear here.

How much does government spend on transport in total?

Stats SA publishes financial reports on all spheres of general government during the course of the year. The spheres include national, provincial and local government, as well as EBAs and higher education institutions.

At the end of each year, these reports are consolidated into a single document that provides an overarching financial view of the entire South African government, drawing on data from 712 institutions.3

According to the latest consolidated report, general government spent R93 billion on road, rail and other transport related activities in 2017/18. This represents 5% of total government spending that year. More money was spent on transport activities and infrastructure than on defence or housing.

Provincial government was the biggest spender on transport in 2017/18, contributing almost 40% to the R93 billion. EBAs contributed almost a third while national government accounted for 28%.

2 The report measures different types of transport that is classified according to the Classification of the Functions of Government (COFOG). This provides a classification of government expenditure by various functions that have shown to be of general use to a wide variety of analytic applications. Statistics on health, education, environmental protection, and transport, for example, can be used to study the effectiveness of government programmes in these areas.

3 Financial statistics of consolidated general government. Read a summary of the 2017/18 report here.