The South African government spent 7,3% more in 2017/18 than it did in 2016/17. The rise was largely driven by general public services, education and health.

This pushed total government spending up to R1,71 trillion1 in 2017/18, R116 billion more than the R1,59 trillion spent in 2016/17. This is according to the latest Financial statistics of consolidated general government report that summarises a range of financial data for all 712 government institutions.2 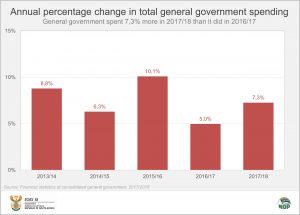 General public services was the biggest driver behind the 7,3% rise in 2017/18, contributing R40 billion to the R116 billion increase.3 This was spurred on by rising interest payments on government debt, as well as increased spending in financial and fiscal affairs.

Health was the third biggest driver. A jump in spending by the Gauteng and KwaZulu-Natal provincial governments on health services was a major contributor to the R16 billion rise in overall health expenditure.

Where does your tax money go?

If we break down the R1,71 trillion that was spent in 2017/18, government’s priorities become quite clear (click on the image to enlarge). 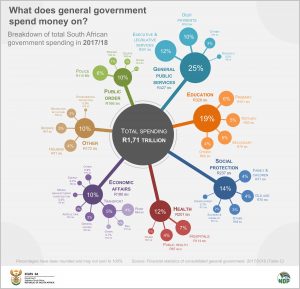 The biggest expenditure items were general public services, education, social protection and health. A closer look reveals a couple of interesting facts. As mentioned earlier, debt payments on interest increased in 2017/18, pushing the total to R163 billion. This is more than what government spends on other functions such as housing (R71 billion) or hospitals (R114 billion).

Another notable fact is that government spends more on the police than it does on primary education.

Government’s contribution to the economy

State spending drives economic activity either through the development of large-scale infrastructural projects or through the provision of resources to the poor in the form of social grants. Investments in education and health have long-term economic benefits. Government is a major economic player, responsible for 18% of total activity in the South African economy. This makes government the second biggest industry after finance and business services.4

The economic affairs bubble in the infographic above represents the most tangible way in which government spending affects the economy. Money is spent on infrastructure and on various industries with the aim of stimulating economic growth.

Government allocated just under R180 billion (or 10% of total expenditure) to economic affairs in 2017/18. This was R9 billion more than what was spent in 2016/17. Transport spending took up R93 billion, more than half of the R180 billion. Over two-thirds of transport spending was focussed on the development and maintenance of road infrastructure.

3 General public services include activities related to the judiciary, parliament, the payment of interest on debt, and transfers to international institutions and countries.