How important is tourism to the South African economy?

At the 2018 International Travel Trade Show in Germany held in March 2018, South African Tourism CEO Sisa Ntshona was quoted as stating that tourism is vitally important to the South African economy, and that the sector should be nurtured for sustained and inclusive growth. Recent data from Stats SA show how important tourism actually is.

The tourism sector directly contributed 2,9% to South African gross domestic product (GDP) in 2016, according to the latest release of Stats SA’s annual Tourism Satellite Account for South Africa report. This makes the tourism sector a larger contributor than agriculture, but smaller than other industries such as construction and mining.

The report also provides a picture of employment patterns within the sector. Despite the challenges that tourism has endured over the last few years, it outperformed other key industries in terms of job creation, adding just over 40 000 net new jobs to the economy over the five-year period from 2012 to 2016.1 This is higher than the number of jobs gained in industries such as trade and utilities (electricity, gas and water).2

Tourism also gained more jobs than manufacturing over this period. From 2012 to 2016, the manufacturing industry had a torrid time, experiencing a net loss of 125 000 jobs. 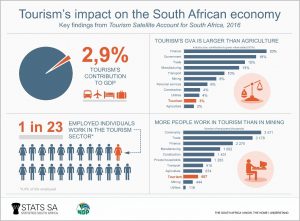 The growing number of people employed in tourism provides some backing to Ntshona’s additional comment at the International Travel Trade Show that youngsters should consider the sector when exploring career opportunities.3

The employment and economic data from the Tourism Satellite Account for South Africa fills an important gap in Stats SA’s regular economic series. There is no mention of tourism in the latest GDP release, for example, even though there is a wealth of data for other industries. This is because tourism is not listed as a distinct industry in the Standard Industrial Classification (SIC) system, the international standard for categorising industries within an economy.4 Used by Stats SA, the SIC classifies the economy into distinct industries, from agriculture, mining and manufacturing to trade, finance and government.

The tricky thing is that tourism related activities occur across multiple industries in this classification standard. Hotels, for example, fall under the trade industry in terms of the SIC, while tour buses are classified under the transport, storage and communication industry.

To report on tourism as a whole, the challenge for statisticians is to tease out tourism related data from across the SIC and to bring these together to create a separate dataset, referred to as a satellite account. This provides an aggregated picture of the influence that tourism related activities have on the nation’s economy.5

Other useful nuggets contained with the Tourism Satellite Account report include employment equity figures within the sector, as well as statistics on the spending behaviour of both international and domestic tourists.

This data complements Stats SA’s other three reports on tourism: the Tourism and Migration release that covers information on the number of international tourists visiting our shores, the annual Domestic Tourism Survey that explores the extent of domestic tourism within the country, and the Tourist accommodation release that provides data on the accommodation industry.

For more information, download the 2016 Tourism Satellite Account for South Africa report, as well as the media release presentation, here.

4 Industries are classified according to the goods and services they produce in the SIC, while tourism is a consumption-based concept that depends on the status of the consumer. The TSA is one element of a System of Tourism Statistics (STS) that provides information for the understanding and monitoring of the impact of tourism on the South African economy over time. The other elements of the STS for South Africa include the surveys of international tourists and domestic visitors, visitor arrival statistics, tourist accommodation, and food and beverage statistics.

5 The other orphaned child that is not distinctly listed by the SIC is the Information and Communications Technology (ICT) sector. Stats SA has published data for the ICT satellite account. An overview of the data is available here.