The 1970s are best remembered for disco, bell-bottoms, and the mesmerising lava lamp. It was also the decade that saw South African mining forge ahead in its influence on the economy and employment. How has the economy in general, and mining in particular, shifted since then?

Mining’s contribution to total economic production climbed in the 1970s to peak at 21% in 19801. Contributing to the upward surge in 1980 was a relatively high gold price. In other words, for every R100 that the South African economy produced that year, R21 was due to mining. In 1987, employment in the industry peaked at just over 760 000 individuals1. 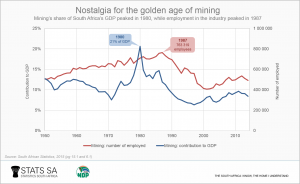 Manufacturing was the largest industry in 1980, falling to fourth place in 2016. 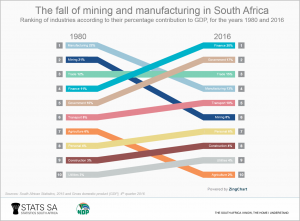 Mining was the second most influential industry in 1980, with its 21% contribution to the gross domestic product (GDP). In 2016, the industry contributed 8%.1,2

Agriculture also slipped in ranking to fall from seventh to tenth place, contributing 2% to the GDP in 2016.

As the primary and secondary sectors of the economy have waned, tertiary industries have taken centre stage. The most notable climber is finance, rising from fourth place in 1980 to become the largest industry in 2016. Government is not far behind, rising in the ranks to take second spot.

Even though mining has lost some of its shine, it is still an important employer. The size of the mining workforce in 2015 was estimated at 490 146 individuals, according to Stats SA’s recent census of mining report3. The PGM (platinum group metals) industry has the largest workforce, followed by gold and coal. 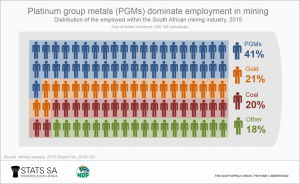 At first glance, it might seem strange that PGMs take up the bulk of the employment pie. ‘Isn’t South Africa known more for its gold?’, you might be asking. As covered in a previous article4, gold production has declined over the decades. In fact, Stats SA’s Environmental Economic Accounts Compendium, also released recently, estimates that South Africa has only 39 years of available gold resources remaining, whereas the country still has 335 years of PGMs and 256 years of coal reserves available5.

The same report shows how gold was once the largest employer in the mining industry, giving way to PGMs in 2006. 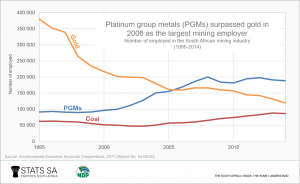 How things have changed since the 1970s! Back then, smart phones would have been science fiction. Today’s world is a very different place, with new challenges and opportunities. What will the world look like a few decades from now? What role will the mining industry play? Only time will tell.

4 The decreasing importance of gold mining in South Africa. Read the article here.