You can’t teach a hungry child: school nutrition in focus

School feeding programmes contribute to the well-being and education of children, according to the United Nations World Food Programme1. Stats SA takes a look at data on hunger in South Africa and explores the reach and cost of South Africa’s National School Nutrition Programme (NSNP).

South Africans are less hungry than they were 13 years ago, according to Stats SA’s latest General Household Survey report; the percentage of the population vulnerable to hunger fell from 29,3% in 2002 to 13,1% in 20152. Most of the decline occurred from 2002 to 2007. After a brief resurgence of hunger during the 2008/09 recession, its prevalence has remained somewhat steady since 2011.

The hunger rate for school-goers is slightly lower at 13,0%, according to data from 20133. South Africa’s National School Nutrition Programme (NSNP), administered by the Department of Basic Education, is currently targeting this group by providing daily meals to learners in poorer schools. In 2014/15, the programme fed an estimated 9,2 million learners in 19 800 schools across the country4.

School feeding schemes have extended their reach, according to survey data. In 2010, 67,8% of learners attending public schools benefitted from a school feeding programme, rising to almost 76,2% in 20152. Limpopo benefitted the most, with the programme assisting 94,1% of learners in that province during 2015. In fact, in its report on schooling in Limpopo, Stats SA lists the school feeding programme as a likely factor that contributed to the rapid fall in that province’s hunger rate3.

What is the cost of the NSNP to the country? Stats SA’s latest Financial statistics of provincial government report, published today, shows that R5,5 billion of provincial government5 expenditure (or 2,9% of the R191 billion spent on education) was directed towards school nutrition during the period April 2014 to March 20156. The R5,5 billion spent means that, for the entire period, it cost about R592 to feed each learner.

The three provinces that received the bulk of the R5,5 billion for 2014/15 were KwaZulu-Natal, Limpopo and Eastern Cape. 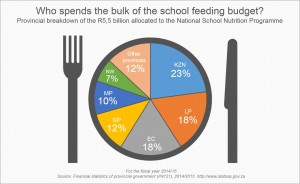 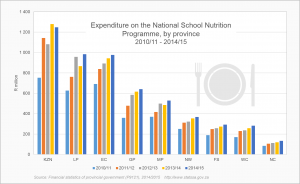 Over the five years R23,6 billion in total was spent on the NSNP by provincial government. With evidence from the United Nations World Food Programme showing the positive impact of school feeding programmes, this can be regarded as a worthwhile investment.

5 Provincial governments are responsible for managing school-level education in South Africa, as well as the NSNP programme. The provincial governments form the second layer of government, between the national government and the municipalities. Provinces are allowed legislative and executive powers over a number of issues, such as vehicle licensing and education (excluding university education).