The bucket toilet system remains a persistent phenomenon in seven of the nine provinces, despite measures to eradicate it. Where are bucket toilets still in use? And is South Africa succeeding in reducing its usage? Data from Stats SA’s latest Non-financial census of municipalities provides some insight into these questions.

The development of improved sanitation services was the main reason for the falling numbers, with municipalities replacing bucket toilets with other options, such as ventilated improved pit toilets, flush toilets, and septic tanks.

In fact, just over a third of consumer units serviced with bucket toilets in South Africa are concentrated in a single municipality: Nelson Mandela Bay in Eastern Cape. In 2014 this metropolitan council provided bucket toilets to 29 429 consumer units, 35% of the national total.

North West, Northern Cape and Mpumalanga experienced an increase in the provision of bucket toilets. This was mainly as a result of municipalities being forced to provide the option to rapidly growing informal settlements.

Bucket toilets are provided as a temporary solution while municipalities develop improved sanitation infrastructure. However, in some cases, the lack of funds to provide better facilities means that the problem of bucket toilets will not be eradicated overnight.

The seventh province where bucket toilets were recorded, Gauteng, experienced no change in usage between 2013 and 2014. 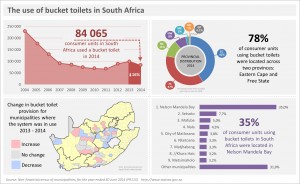 1 A consumer unit is an entity to which the service is delivered, and which receives one bill if the service is billed, alternatively known as a delivery point. This concept is often referred to as a household by municipalities, but this is not strictly correct, as households and consumer units do not coincide one to one, particularly in blocks of flats, on stands where there are multiple households in the same dwelling, or in additional dwellings, such as garden flats, backyard rooms, etc., and in the case of public taps.