The SESE is a household-based sample survey conducted every four years. The survey collects detailed information about non-VAT registered businesses, most of which are in the informal sector.

* The 2005 SESE estimates have not yet been adjusted to reflect the new population benchmarks.

In 2001 as many as 2,3 million people were running informal businesses. The number decreased to 1,5 million in 2013. And over 95% of the owners of such businesses had only one business. Informal businesses are predominantly run by black Africans, persons aged 35–44 years, and those with the lowest levels of education. 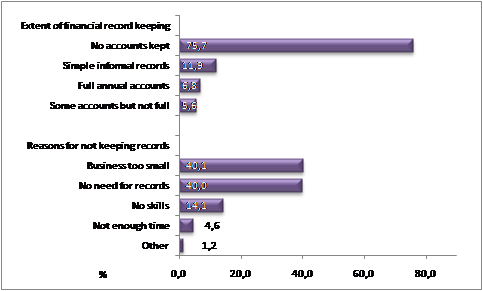 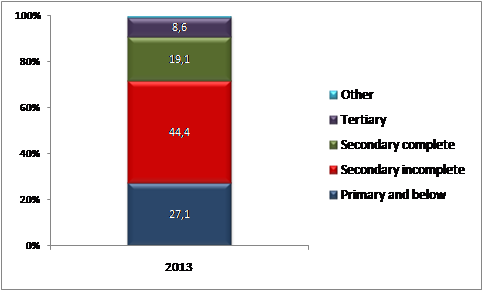 In 2013, most people running informal businesses did not keep financial records for their business and this is likely to be associated with their education profile which indicates that as many as 71,5% had an education level lower than matric (Figure 1 and Figure 2).

In 2013, the proportion of the working-age population running informal businesses was highest in Limpopo (6,3%), Mpumalanga (6,1%), Gauteng (5,0%) and KwaZulu-Natal (4,7%). And as many as 25,3% of such businesses were run from the owner’s dwelling in a separate space and an additional 21,3% were also run from the owner’s dwelling but in the family space. As many as 28,3% of people running informal businesses had no electricity at their business; 33,2% only had a pit latrine while as many as 8,0% had no toilet facilities available for their business. This suggests that many are survivalist in nature.

The main reason why people started informal businesses was due to unemployment. This was reported by 60,6% of persons in 2001 and by 69,2% in 2013. In every province, except Gauteng and Northern Cape, over the period 2001 to 2013 and reflecting the effects of the global recession – there was an increase in the proportion of people who stated unemployment as the main reason for starting informal businesses. Most businesses were in the Trade industry – ranging from 1,6 million (69,6%) in 2001 to 0,8 million (54,4%) in 2013. 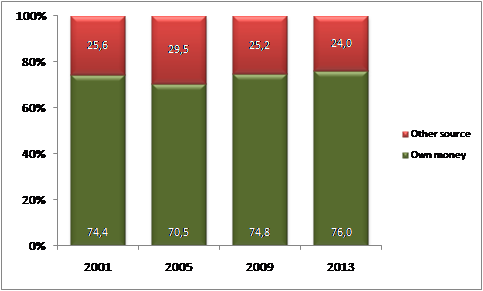 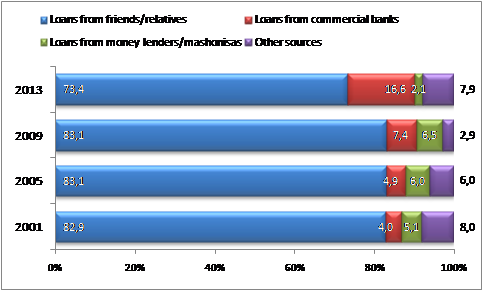 The vast majority of people who started informal businesses used their own money to do so (over 70,0%). Among those who did not use their own money, most borrowed from friends and relatives. The proportion that did so declined from 82,9% in 2001 to 73,4% in 2013 but this was accompanied by an increase in the proportion who were able to get loans from commercial banks over the same period from 4,0% to 16,6% (Figure 4). As many as 79,1% of persons running informal businesses did not have a bank account for their business. And over 90% had no credit facilities, no asset finance or mortgage loans for their business operations. 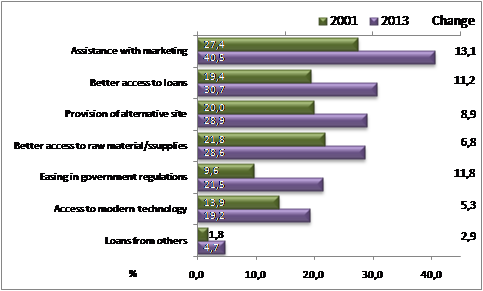 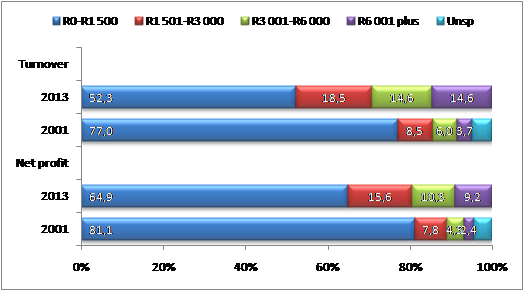