Gauteng municipalities lead the way in income generation from households

Municipalities in Gauteng province are better off in terms of generating their own revenue in the form of services provided to households, while at the same time they are also getting a bigger share of the grants and subsidies received from both national and provincial governments in proportion to the increase in total population.

Municipalities are responsible for providing basic services to everyone within their municipal jurisdiction. These income generating services include supplying electricity, water and sewerage, collecting and disposing of refuse removals. In order to provide these services, municipalities charge residents for the provision of services.

The latest QFSM provides some interesting detail about the municipal income -generating sources. Municipal total income for the second quarter amounted to R63,8 billion, (compared to R61,5 billion for the first quarter (January – March 2013)) an increase of R2,3 billion. Of the R63,8 billion,  sales of electricity contributed 29,4% (R18,7 billion), grants and subsidies contributed 22,6% (R14,4 billion), property rates contributed 18,5% (R11,8 billion), other income, which consists of, among others, interest received, rental of facilities and equipment, fines, etc., contributed 14,8% (R9,4 billion) and sales of water contributed 9,3% (R5,9 billion). The smallest contribution was for sewerage and sanitation and refuse removal at 2,9% (R1,8 billion), and 2,5% (R1,6 billion) respectively. 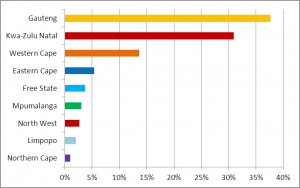 Figure 1 indicates that municipalities in Gauteng province are leading on income generated through property rates at 38% (R4,5 billion), followed by KwaZulu-Natal with 31% (R3,7 billion). The smallest contribution was made by municipalities in Northern Cape with 1% (R116 million). 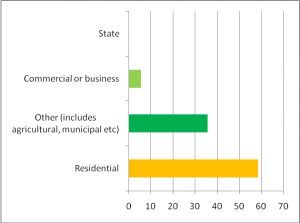 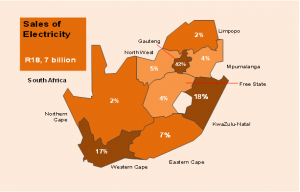 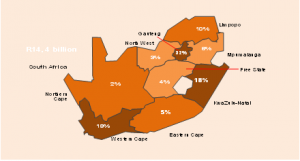 The above information highlights some of the financial status of municipal finances within the South African local government sphere. Readers can find more quarterly municipal financial information by accessing the publication, either online on the Stats SA website or by contacting Stats SA’s User Information service centre.