Almost 1 million births in 2021 and the most popular baby name is ….

According to the Recorded Live Births, 2021 report released by Statistics South Africa, almost 1 million births occurred in 2021 and the most popular baby names were Lethabo and Melokuhle for boys and girls respectively.

Melokuhle, Lethabo and Lethokuhle were the most popular names amongst both baby girls and boys in South Africa in 2021. 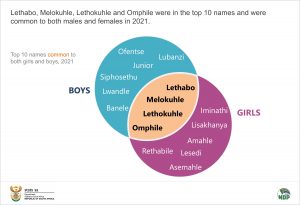 Naming of a new-born child plays a very important role in most cultures around the world. For instance, African baby names are given for reason, relevance and purpose. Similarly, South Africa is a country with a variety of cultures and religions and this has a profound influence on baby naming. From the day or time a baby is born to the circumstances surrounding the birth, several factors influence the names parents choose for their children. For example, Lethabo signifies joy and happiness, Melokuhle represents good things, Lubanzi signifies acceptance and Iminathi signifies standing with us (God is).

Amongst males, the top three leading forenames were Lethabo, followed by Lubanzi and Melokuhle. The leading forenames for females were Melokuhle, followed by Omphile and Iminathi in third place. Melokuhle, Lethabo and Lethokuhle appeared on both males and females top ten list. Melokuhle ranked first amongst females while it ranked third amongst males. In general, the popular baby forenames for males and females reflect positive hopes for the child, express beliefs and are inspired by positive connotations of both love and acceptance. 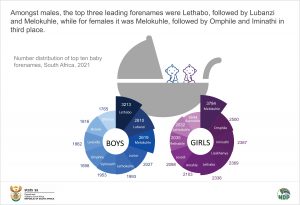 For both sexes, Dlamini was the most common baby surname in 2021, followed by Nkosi and Ndlovu. Nine of the surnames were from the Nguni clans namely isiZulu, isiXhosa, isiNdebele and siSwati. Mokoena which featured as the sixth most popular surname was the only non-Nguni surname.

Information regarding the mothers age  at the birth of child is crucial for planning, monitoring and evaluation of programmes focusing on maternal and child health, social welfare, access to family planning, curbing teenage pregnancies and safe motherhood initiatives (United Nations, 2015). When considering the age of the mother at the birth of the child, there appears to be a similarity in top 10 names of girls compared to boys. 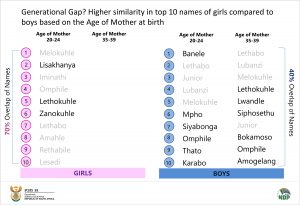 Of note was the increasing number of teenage mothers in 2021. A total of 45 257 births were from mothers aged 17 years and younger and of these, 42 were births from mothers between the ages of 11 and 12.

The provincial picture shows a similar trend where the names Lethabo, Melokuhle, and Omphile featured in most of the nine provinces in 2021. Generally, birth registrations remain higher in the most populated provinces in South Africa. The highest proportion of births were registered in Gauteng (21,4%), followed by KwaZulu-Natal (20,4%). Provinces with lower birth registrations in 2021 were Northern Cape at 2,7% and Free State at 5,0%.. The patterns are similar to those recorded for 2020.