The three categories with the highest annual inflation rates in November were transport (15,3%), food & non-alcoholic beverages (NAB) (12,5%) and hotels & restaurants (7,9%). 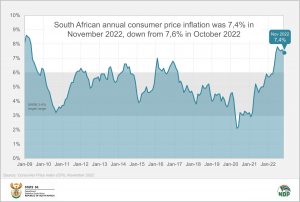 Food & NAB inflation climbed to 12,5% in November from 12,0% in October, representing the seventh consecutive month of accelerating price inflation. This rising trend is mainly driven by inflation in bread & cereals, which reached an annual rate of 19,9% in November, up from 19,5% in October. This is notably higher than the modest 2,3% recorded in November 2021.

The annual rate for meat was 10,5% in November, unchanged from 10,5% in October. Bacon and other pork products increased by 6,4% and 1,9% respectively between October and November.

Prices of milk, eggs & cheese products rose by 10,9% in the 12 months to November, slightly higher than the rate recorded in October (10,5%). Coffee whitener increased by 4,6% between October and November and full cream long life milk by 2,4%.

The annual rate of change for the oils & fats index declined for the third consecutive month, decreasing to 24,8% from 25,7% in October. The average price for a 750 ml bottle of sunflower oil was R38,12 in November, lower than the peak of R45,33 recorded in July.

The transport index recorded its fourth consecutive month of disinflation, with the annual rate declining to 15,3% in November from 17,1% in October. This is largely the result of falling fuel prices in recent months, with annual inflation reaching 25,3% in November compared with 30,1% in October. However, fuel prices increased by 3,2% between October and November—a smaller rise than the 7,1% jump between October and November 2021. Used vehicle prices continue to increase rapidly, with monthly increases of approximately 1,3% since the beginning of this year.

The charts below show the products that recorded the largest percentage price increases in November. 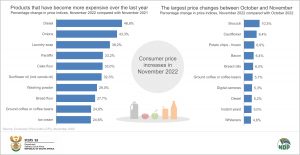 1 The average price of super and special maize meal products.