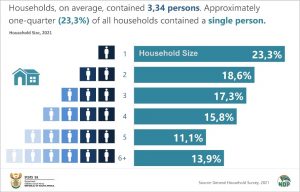 The General Household Survey has tracked the progress of development across several broad areas since 2002. Households are the building blocks of society and their well-being reflects on the welfare of our society. Let’s take a look at some of the interesting facts about how households in SA function and the services they get.

Household composition (Relationship between people who reside together)

Nuclear households (households that contain spouses/partners with or without biological children) comprised 41,5% of all households. Slightly more than one-third (33,6%) of households were extended, meaning that they contained biological parents and their children as well as in-laws, grandparents, aunts, uncles, and cousins. These were most common in rural areas.

More than four-fifths (83,6%) of all households lived in formal dwellings; 11,7% lived in informal, and 4,2% lived in traditional, dwellings. Almost 70% of households owned the dwelling they lived in while 18,7% rented it and 11,6% indicated that they lived in their dwellings without charge.

Although 88,7% of all households used tap water in their dwellings, their yards or from their neighbour’s or communal taps, only 45,2% had water inside their dwellings. An evaluation by income quintile[i] shows that the percentage of households with access to piped water in the dwelling increases with higher income quintiles, while reliance on other sources, including using taps in the yard, decreases.

[i] An income quintile is a method to measure the average (per capita monthly) household income of residents, ranking them from poorest to wealthiest, and then grouping them into five income quintiles (1 being poorest and 5 being wealthiest), each quintile containing approximately 20% of households.

Although all households (97,3%) had at least one cell phone, only 7% owned a land line.

More than three-quarters (77,5%) of households had access to the internet in one way or the other, but only 10,4% of households could access the internet at home using fibre or ADSL. Mobile devices made access relatively common (69,4%) and more equitable as it provided access to almost three-fifths (59,2%) of rural households, compared to 73,7% of urban households.

One-third (33,6%) of all households contained at least one member who used a minibus taxi/sedan taxi or bakkie taxi during the week preceding the survey. By comparison, only 3,7% of households used a bus, while less than one percent (0,2%) used trains.

Of the households that owned vehicles, the majority (59,1%) owned only one vehicle, while only 9,9% of households owned three or more vehicles. 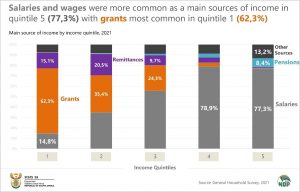 Assets, whether they are owned by individuals or by households, may provide a range of direct and indirect benefits, including status and security, to their owners. Household assets influence the extent to which households can diversify their livelihoods. Asset poverty is an economic and social condition that is more persistent and prevalent than income poverty.