South African gross domestic product (GDP) expanded by 1,9% in the first quarter of 2022, representing a second consecutive quarter of upward growth.1 The size of the economy is now at pre-pandemic levels, with real GDP slightly higher than what it was before the COVID-19 pandemic. 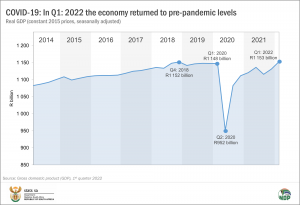 This release covers the first quarter of the year (January, February and March). This means that the economic impact of the devastating floods in KwaZulu-Natal, which occurred during the second quarter in April, will only reflect in the GDP results due for release in September.

On the production side of the economy, eight of the ten industries recorded positive growth in the first quarter, with manufacturing the star performer. The sharp increase in manufacturing output was mainly driven by a rise in the production of petroleum and chemicals, food and beverages, and metals and machinery. 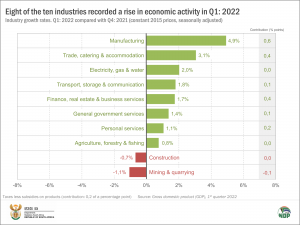 Finance, real estate and business services, as well as trade, also made sizable positive contributions to GDP growth. Trade activity was buoyant in the first quarter, with positive results from wholesale, retail, motor trade, and catering and accommodation.

In a rare case of the national statistical agency becoming a contributor to growth, Stats SA’s drive to employ thousands of fieldworkers for the population census helped generate economic activity in general government.

On the downside, both mining and construction contracted in the first quarter. Mining output was lower, mainly due to a pullback in the production of platinum group metals, iron ore and gold. Construction saw its fourth consecutive quarter of contraction, with underwhelming results reported for residential buildings and construction works. Economic activity related to non-residential buildings, however, increased in the first quarter.

Stats SA also measures the expenditure side of GDP, providing an indication of total demand in the economy. Household consumption, government consumption, gross fixed capital formation, exports and imports all continued to grow in the first quarter. 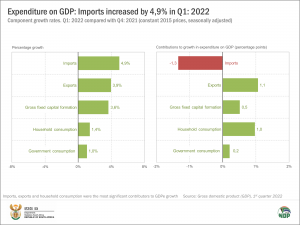 Household consumption increased by 1,4% in the first quarter. The hospitality sector in particular saw a sharp rise in activity as consumer spending on restaurants and hotels increased by 6,5%. 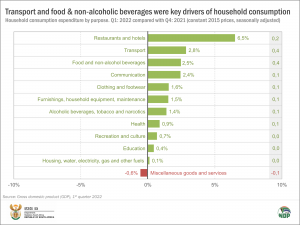 1 The quarter-on-quarter rates are seasonally adjusted and in real (volume) terms (constant 2015 prices). This is Stats SA’s fourth GDP statistical release after the completion of its latest benchmarking and rebasing exercise. More information on this exercise is available here. Note that Stats SA no longer uses the annualised rate as the headline growth rate.

2 Stats SA, Going with the flow: Tracking products through our economy (read here).