The Young and the Restless – Adolescent Health in SA

In South Africa, adolescents aged 10-19 represent a significant proportion of the population at 17,4% and contribute to 2,1% of the total mortality. The health and well-being of adolescents is of particular importance in society as they represent the future work force and contributors to potential economic productivity. However, adolescents may face many challenges such as mental health issues, alcohol and tobacco use, and early and unprotected sex with multiple partners, which carries a high risk of acquiring HIV infections and other sexually transmitted infections as well as teenage pregnancy.

According to the results, the leading causes of adolescent deaths by main broad group are external causes of morbidity (comprising accidents occurring at home or place of residence, assault, contact with an object and traffic accidents), followed by certain infectious diseases that include intestinal infectious diseases, tuberculosis and HIV, and respiratory system diseases led by influenza and pneumonia.
External causes of morbidity contributed 46 572 deaths to the total number of deaths among adolescents between 2008 and 2018. Certain infectious diseases recorded deaths of nearly 25 000, while the remaining broad groups reported less than 10 000 deaths per group. The majority of external causes of morbidity and mortality are accidents that occur at home, school or other place of residence, assault, contact with an object (sharp or blunt), traffic accidents, exposure to mechanical objects such as gun shots, accidental drowning, exposure to smoke or fire, intentional self-harm and exposure to forces of nature such as lightning. 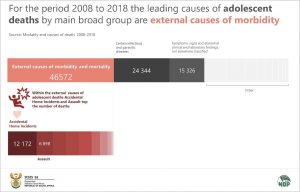 External causes of mortality are also known as non-natural causes because they are not a result of a health condition or illness. The report shows that accidental incidents occurring at home are the leading external cause of deaths (12 172), followed by assault at 6 898.  Contact with an object (5 529), other threats to breathing and traffic accidents also contributed to external causes of mortality amongst adolescents. Intentional self-harm and exposure to forces of nature contributed less than 1 000 deaths to the total deaths among adolescents between 2008 and 2018.
More adolescent males died from non-natural causes than females. Over 80% of violence-related causes of death, assault and injuries following exposure to mechanical force such as gunshot wounds, occurred in males. A similar trend is observed for road traffic accidents, with males accounting for over 60% of the fatalities compared to their female counterparts. 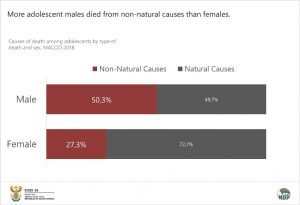 The South African Constitution guarantees all women the right to make decisions concerning reproduction. The introduction of the Choice on Termination of Pregnancy (TOP) Act 92 of 1996 means that all women, irrespective of race, age, geographical location or socio-economic status can access a safe and legal termination of pregnancy1. Nationally, the rate of TOP among women aged below 20 years was around 12% for all the reporting years, showing a slight increase from 2017 (12,1%) to 2019 (12,9%).  In the three reporting years, the highest rates of TOP were observed in Limpopo. In 2017 and 2018, North West had the lowest proportions of TOPs, whilst for 2019, the lowest rate was recorded in KwaZulu-Natal. Termination of pregnancy rates were seen to consistently increase in the Western Cape, Free State, North West and Limpopo.