What is poverty and what does it mean to be poor? Does it mean not having enough money to meet basic needs including food, clothing and shelter? Does it mean not being able to afford to buy a car or furniture for your home or even go on holiday because your income does not allow for those extra “luxuries”? The multi-faceted nature of poverty means that no single definition can define all the aspects that encompass being poor. While you may feel that you are poor because you cannot afford the latest iPhone, someone else may look at the clothes you wear and consider you rich.

According to a report released by Statistics South Africa titled “Subjective poverty in South Africa. Findings from the General Household Survey 2019”, the profile of a subjectively-poor household in South Africa is one typically headed by a black African female who is younger than 35, residing in a rural area that is located in a rural-based province and who has lower levels of education. The dwelling usually has between 0 and 1 bedrooms. When taking the happiness status of this household into account, they tend to be less happy than they were 10 years ago, with the general health status of its household head being poor. In these households it is more likely that all economically active individuals (age 15 years and above) are unemployed. On the income distribution, this household is located in the lower quintiles.

The report uses three of the most widely-utilised subjective poverty measures in order to update the subjective poverty profile in South Africa. Adapted from the Living Conditions Survey (LCS), these include the self-perceived wealth indicator which asks respondents to self-assess and identify the economic status of their households, the minimum income indicator which asks respondents to select the smallest level of income with which their household could make ends meet and the income evaluation indicator which asks respondents to directly evaluate whether or not their household’s actual level of income is above or below the minimum income required for the household to make ends meet.
According to the results, poverty is also associated with being less happy. Households which were less happy had the highest incidence of poverty for all three poverty indicators. Less happy households, based on the minimum income indicator, had the highest incidence of poverty at 62,4%, whilst in terms of the income evaluation indicator, the highest incidence of poverty was 58,4%. According to the self-perceived wealth indicator it was 45,0%. 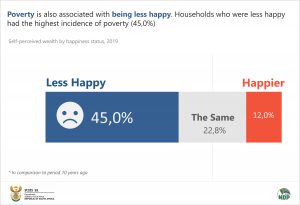 Nationally, the minimum income indicator produced the highest subjective poverty rates (57,0%), followed by the income evaluation indicator (46,7%) and then the self-perceived wealth indicator 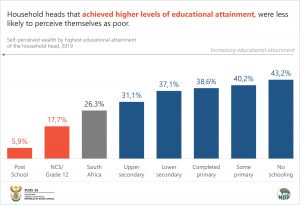 Since poverty is multi-faceted, it can be defined in multidimensional terms. The way poverty is defined informs how it will then be measured. The measurement of poverty can be classified into broad categories, i.e. objective, relative, multidimensional and subjective measures. The most common of these – and also the official approach used by Statistics South Africa – is the objective measurement of poverty using poverty lines, which looks at a fixed minimum monetary amount below which an individual is classified as poor. However, there are many who argue that individuals themselves are the best judge of their own welfare status, as they hold all the knowledge needed to make that assessment. Hence, using subjective poverty measures to complement the traditional objective poverty indicators allows for a more robust and holistic measurement of welfare in South Africa. Subjective poverty, which is the focus of this report can be defined as an individual’s assessment of his or her own welfare or happiness.