Experience of crime in SA dropped over 2020/21 period

Experience of crime in SA dropped over 2020/21 period

According to the Governance, Public Safety, and Justice Survey, 2020/21 (GPSJS) released by Statistics South Africa, levels of crime experienced by households and individuals in SA over the 2020/21 period has dropped.

Due to the COVID-19 pandemic, South Africa implemented strict measures, with multi-level lockdowns, curfews, the ban on travel, and restrictions on alcohol and cigarettes. The survey, which covers the period of the pandemic (01 April 2020 to 31 March 2021) shows that while an upward trend was observed between 2016/17 and 2019/20 for experience of housebreaking, theft of motor vehicle and murder, there was a decline in the experience of these three types of crime between 2019/20 and 2020/21. 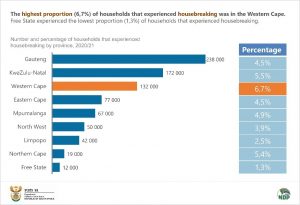 An estimated 346 000 incidences of street robbery occurred in 2020/21, affecting 304 000 individuals aged 16 years and older. The number of affected individuals represents 0,7% of the population. About 54,9% of individuals who experienced theft of personal property reported all or some incidences to the police.

An estimated 64 000 incidences of hijackings occurred in 2020/21, affecting 64 000 individuals aged 16 years and older. The number of affected individuals represents 0,2% of the population. 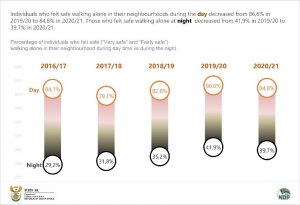 While lockdown restrictions attempted to control the spread of COVID-19 by keeping people at home, this may have increased the chance for domestic and family violence to occur. According to UN Women1, “Since the outbreak of COVID-19, emerging reports have shown that several types of violence against women and girls have intensified”. According to GPSJS 2020/21 report, there has been a decrease in the proportions of those who believe that it is justifiable for a man to beat his woman/wife. Both males (88,3%) and females (87,3%) think that the spouse or intimate partner commit the most acts of gender-based violence. This is followed by those who think a previous partner, relative or family member that is not part of the household commits the most acts of gender-based violence. About 99% of persons aged 16 years and older agreed/strongly agreed that all kinds of violence against women and children must be reported. 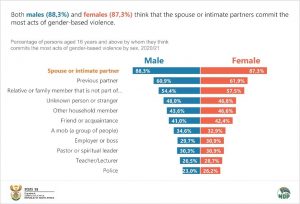