Women are unequal on the road and in life

Would it surprise you to know that women in South Africa are far less likely to have a driver’s license than men?
According to a new gender report, Gender Series Volume VIII: Gender patterns in Transport, 2013–2020, released by Statistics South Africa, only 21,8% of females possessed a driver’s license in 2020 compared to 40,1% of males. The possession of a driver’s licence also showed gender and racial disparities. Black Africans lagged behind all other population groups, with females from this population group recording the lowest percentage (9,6% in 2013 to 13,4% in 2020) when compared to females from other population groups. 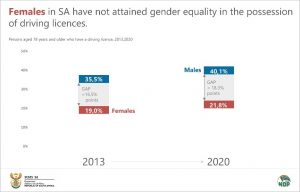 The report, which outlines the disparities between males and females on their general travel patterns, shows that the use of public transport, particularly taxis, remains skewed toward black African and coloured population groups, with females reporting a slightly higher usage than males. However, females from white and Indian/Asian population groups were more likely to be car passengers or car drivers.

Transport is critical to achieving social equity because it enables people to participate effectively in various life activities and avert potential exclusions, such as the inaccessibility of education to some learners due to a lack of a viable transportation system.

In 2020, travel patterns to educational institutions for Grade R to 12 revealed that more than 70% of learners in rural areas, both male and female, were more likely to walk all the way to school. However, females in urban areas were more likely than males to ride as a passenger in a car, take a taxi, or take the bus to school. In 2020, travel patterns to Post-Secondary Education and Training institutions (PSET) showed that more than 47% of females took a taxi these institutions. This was 12,5 percentage points higher than their male counterparts, who were at 34,7%. Walking all the way to the PSET institution was the second most popular mode of transport for both males and females, while taking the train was the least popular.

Safe transport is crucial for women’s access to decent work, particularly if they depend on public transport and have to travel late at night. Gender-based violence risks increase for women traveling from all walks of life, including walking to and from boarding points, and waiting at public transportation boarding points or stations, such as bus, taxi, and train stations. Safety is a major concern that affects women and girls disproportionately. Women on public transportation may be susceptible to unwanted attention, sexual harassment and violence.
According to the report the majority of workers drove cars (30,5% in 2013 and 36,0% in 2020) or used taxis (26,6% in 2013 and 28,6% in 2020). Women, however, are more likely to depend on public transport than men. The percentage of males commuting as car drivers (41%) surpassed that of females by 11,8 percentage points in 2020. Taxis were the most popular mode of transportation for females (30,6% in 2013 and 33,6% in 2020) to get to places of employment. Females were also generally more likely to use buses than males. 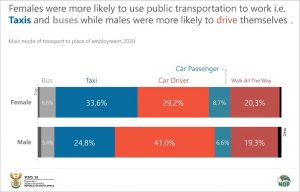 Day trips, defined as travelling away from one’s usual home and returning on the same day, but not including trips to educational facilities or work, declined from 60,5% in 2013 to 28,8% in 2020. The reasons for taking trips differ between males and females. Differences in the main purpose of day trips undertaken during this period revealed that females were more likely than males to take trips to religious/cultural/traditional facilities, go shopping, attend funerals, and travel to medical facilities. On the other hand, males were more likely to have visited friends/family/ancestral home, attended sporting events, and travelled to look for work. 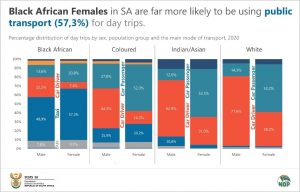 The sustainable development agenda’s goal 11 (Target 11.2) recognises the importance of having access to safe, accessible, and sustainable transportation systems that benefit everyone, and it also emphasises the need to improve road safety and expand public transportation, with special attention being given to the needs of vulnerable groups, including women. Therefore, understanding gendered travel patterns is critical for meeting regional and international commitments while also responding to people’s mobility needs. This report provides analysis relating to gender and transport and outlines the disparities between males and females on their general travel patterns.