A deep dive into the price of fuel

Note: The original version of this article, published on 1 December 2021, was based on fuel price adjustments announced by the Department of Mineral Resources and Energy (DMRE) on 29 November. On 1 December, the DMRE made changes to these adjustments. This article was revised on 2 December 2021 to reflect these changes.

Fuel prices hit a record high this December. Stats SA provides a breakdown of what you are paying at the pump, where this money is going, and the impact on consumer inflation.

Trying to make sense of all the elements that make up the fuel price can be quite daunting. There are up to 13 different charges, depending on the type of fuel and where you happen to live. Currently, the price for inland 95-octane petrol stands at R20,29 per litre (December 2021). According to the Department of Mineral Resources and Energy1, this price consists of these four broad elements:

The basic fuel price is related to the costs of purchasing petroleum products from international markets, and the costs related to shipping these products to South Africa. This cost is largely influenced by the international price of crude oil and the R/$ exchange rate.

All other elements making up the petrol price are local in nature. These include taxes, levies, margins, and storage and distribution costs (Figure 1).2 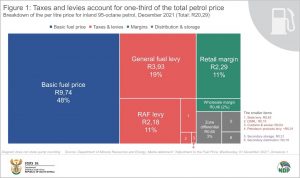 Steaming ahead: the rise in the RAF levy

What is immediately evident from the time series chart below (Figure 2) is that the basic fuel price fluctuates more than the general fuel levy and RAF levy. This is because the basic fuel price is set every month by the Department of Mineral Resources and Energy. Changes to the general fuel levy and RAF levy are announced once a year during the National Budget Speech (click on the image to enlarge). 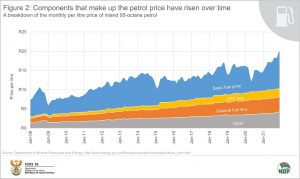 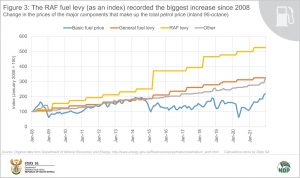 Where do these levies go?

The general fuel levy generated R80 billion for government in 2019/20, accounting for about 6% of total tax revenue.6 It’s not the biggest source of revenue for government, but it brings in more money than customs duties or alcohol and tobacco excise duties.

Money from the general fuel levy flows into the National Revenue Fund together with revenue from all other taxes. There is a portion of the general fuel levy that is specifically set aside and transferred to South Africa’s eight metropolitan municipalities. In 2019/20, this amounted to R13,2 billion.7

The impact on the value of fuel sales and inflation 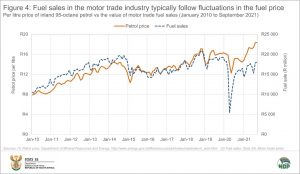 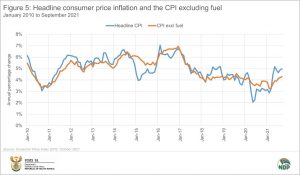 For example, in 2017, the CPI excluding fuel curve follows the headline rate, indicating a subdued impact from fuel prices. In contrast, consumer inflation increased noticeably in 2018 without a similar rise in the CPI excluding fuel curve. That year saw major increases in fuel prices (Figure 4) that bit significantly into the pockets of motorists.

During the early days of the COVID-19 pandemic in 2020, tumbling fuel prices contributed significantly to the fall in overall inflation in May that year, pushing the headline rate to its lowest reading since September 2004. The CPI excluding fuel line has lagged behind the headline rate in 2021, indicating the influence of rising fuel prices on consumer price inflation.