The annual change in the consumer price index (CPI) in October 2021 was 5,0%, unchanged from the 5,0% recorded in September. The monthly rate also held steady, remaining at 0,2%. Food and non-alcoholic beverages (NAB) and transport were the most significant contributors to both the annual and monthly rates. 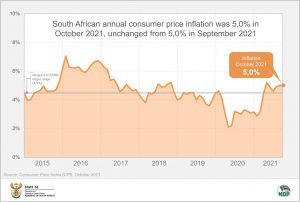 Bread & cereals inflation slowed over the year after reaching a 12-month high of 5,1% in January, decreasing to 3,0% in October. Spaghetti and macaroni are notable products in this category that were cheaper in October than they were in January.1 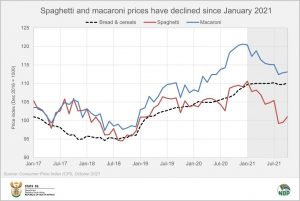 On a monthly basis, white and brown bread registered price increases. A loaf of brown bread, for example, was on average 36c more expensive in October compared with September, increasing to R13,59 from R13,23. Special and super maize meal prices edged lower.

Annual meat inflation hit a three-month low of 9,1% in October. Of all the meat products in the inflation basket, polony recorded the highest annual rate (16,1%). IQF (frozen) chicken pieces were up 13,0% over the same period.

Oils & fats recorded an annual rate of 20,9%, representing the sixth consecutive month with the rate above (or at) 20,0%. The monthly rise was 1,7%, the highest since May 2021 (5,2%). The products that recorded the biggest increases were margarine spread (in a tub), brick margarine and peanut butter.

Vegetable price changes are typically volatile as they are heavily influenced by seasonal patterns and weather conditions. Vegetable prices increased by 7,2% in the 12 months to October 2021, with potatoes the most significant contributor to this rise (increasing by 19,1%).

The transport index jumped by 10,9% in October 2021 compared with October 2020. This rise was mainly the result of high fuel prices that registered an increase of 23,1%. Rising vehicle prices also contributed to transport inflation, climbing by 5,1% over the same period, and by 1,0% compared with September 2021. By comparison, the average annual increase for vehicle prices was 3,0% in the period 2009 to 2019.

1 In some cases the product descriptions in the CPI release are a form of shorthand for their more detailed components, e.g. ‘Bread and cereals’ includes pasta.