Headline inflation slowed to 2,9% in February from 3,2% in January, the lowest reading since June last year when the rate was 2,2%.

This is the third time in the past 12 months that the annual rate has slipped below the bottom end of the South African Reserve Bank’s inflation target range. Inflation was below this 3% level in May and June last year. 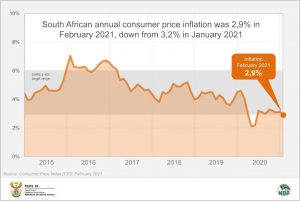 It may seem odd that the monthly change was relatively high while the annual rate was lower than that recorded for most of the past 12 months. This is because not all products in the CPI basket are surveyed every month. For example, medical insurance (medical aid) is usually measured in February (which picks up the main increase for the year) and again in April.1 This has a large impact on the monthly change in the CPI in February, whereas there is a cancelling effect when it comes to the annual rate.

Health inflation has slowed over the last year

Medical insurance (medical aid) is the single biggest item in the CPI basket, taking up 7,6% of total household spending. The average annual increase across medical aid schemes surveyed in February 2021 was 4,7%, substantially lower than the rate recorded in February 2020 (9,6%).

The price data for both medical services and medical insurance show that households are paying, on average, 4,3% more for medical-related products and services than they did a year ago. This increase is lower than the annual rate recorded in February 2020 (9,0%).2

Annual inflation for food and non-alcoholic beverages was 5,2% in February, down from the 12-month high of 6,0% recorded in December. The monthly increase of 0,3% in February is lower than that recorded in January (0,7%).

At 4,6%, annual bread and cereals inflation was slightly off from its own 12-month high of 5,1% in January. White bread prices increased by 8,0% while super maize meal prices declined by 3,5%.

Annual inflation for oils and fats was 10,6% in February 2021, the highest rate since November 2016. In contrast, fruit inflation hit its lowest annual rate in 14 months. Vegetable prices declined by 0,7%.

Fuel prices on the up

After four consecutive months of price decline, fuel recorded a month-on-month rise in prices in January. Prices increased further in February, rising by 5,2% month-on-month. The price of inland 95-octane petrol increased by 81c to R15,67 per litre between January and February. Despite this increase, the price is still lower than the R16,03 per litre motorists paid in February 2020.3