All the single ladies, put your hands up!

Single ladies, if you’re wondering why your man hasn’t proposed yet, perhaps he’s waiting to turn 37? According to a report released by Statistics South Africa (Stats SA), Marriages and Divorces, 2019, the median age of bridegrooms increased from 36 years in 2015 to 37 years in 2019. Similarly, the age of brides increased from 31 years to 33 years over the same period. 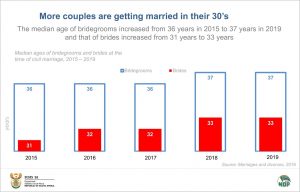 The age at first marriage or union is of interest to population scientists because of the close link between marriage and the onset of pregnancy, childbearing and, ultimately, fertility. This link tends to be weakened in populations where pre-marital fertility is widespread. Nevertheless, age at first marriage or union continues to be a good proxy for measuring not only fertility but also other health and socio-economic indicators relating particularly to the role and status of women in society. 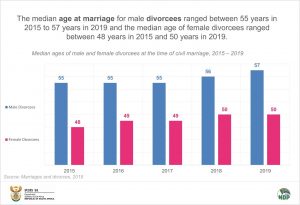 Ladies, if your man is a divorcee, you may be interested to know what the chances of him marrying you are. Data shows that 57,9% of male divorcees married single ladies. Of all the divorcees that were married to single ladies, 92,6% of them were older than the ladies they married.

If your marriage did not end in a happily ever after, you may be one of the 23 710 completed divorce forms that Stats SA received and processed for the compilation of this report. A decrease of 1 574 (6,2%) divorces from the 25 284 cases processed in 2018 was noted in 2019. The report shows that about 174 divorces were granted to same-sex couples.

The median age at the time of divorce in 2019 was 45 years for males and 41 years for females, indicating that, generally, divorcing males were older than divorcing females, with a difference of about four years. According to the report, there were fewer divorces among the younger (less than 25 years old) and the older (65 years and older) divorcees. 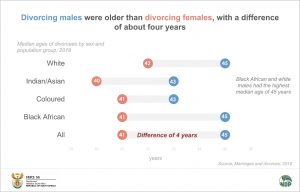 Around the world, marriage ages1 vary widely for many underlying reasons. The data indicates that the more developed the country, the higher the median ages tend to be. In these countries, the age gap between men and women getting married was, more often than not, smaller. When looking at developing countries, including many in Africa, on average, people got married at a younger age, with age gaps being a little wider at times.2

Men, regardless of their marital status, still prefer to marry single ladies. More marriages occur between single ladies and single men than with divorced men and widowed men. In 2019, 93,9% of never married men wedded never married women, whereas 1,2% of those married divorcees and 0,4% married widows.

Irrespective of marital status, men prefer to marry younger single ladies. It is important to note that with both divorcees and widowed men, only 7,4% and 9,5% respectively married single ladies older or the same age as themselves.

Go on ladies, get your man!

If you missed the link in the article above, the complete report is available here.