10,1 million SA learners walk all the way to their educational institution 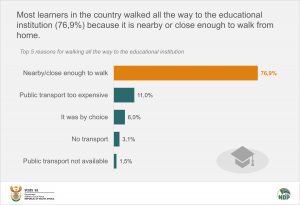 Across the provinces, the highest percentage of learners who walked to their educational institution were in KwaZulu-Natal (20,3%) and Gauteng (17,7%), followed by 14,6% in the Eastern Cape and Limpopo.

Most workers used private transport (43,5%) as their main mode of travel to work, while 35,0% used public transport. 20,3% of workers reported walking all the way.

For work-related travel, the use of public transport was important across all geographic locations. However, urban workers were more likely to use a taxi than a bus as their main mode of transport, while rural workers were most likely to use a bus as their main mode of transport.
The estimated total number of workers’ trips using public transport decreased significantly from 5,4 million in 2013 to 4,7 million in 2020. Taxis accounted for most public transport users, with 80,2% of workers using taxis, which is more than the proportion reported in 2013 (67,6%). More than fifteen per cent (16,6%) of workers using public transport used buses in 2020, whereas in 2013, the percentage of workers who used buses was 19,5%. Those who used trains in 2013 (12,9%) significantly decreased to 3,2% in 2020. 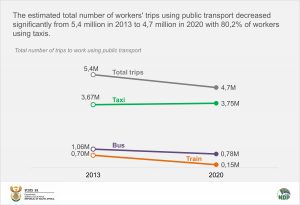 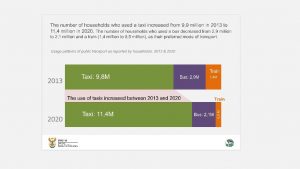 Facilities at the taxi rank and taxi fare remained the highest reason for dissatisfaction with minibus taxi services among South African households. In 2020, more than half of these households (56,9%) were dissatisfied with the facilities at the taxi rank. Regarding bus services, households were most dissatisfied with bus stop facilities, the level of crowding in the bus and security at the bus stop.