Measuring the progress of development in SA

The General Household Survey, 2019, which tracks the progress of development and identifies persistent service delivery gaps in South Africa, was recently released by Statistics South Africa. Now in its eighteenth year, the survey has yielded a rich set of information across a wide variety of fields such as education, health, disability, social security, housing, energy, access to and use of water and sanitation, environment, refuse removal, telecommunications, transport, household income, access to food, and agriculture.

Let us look at some of the most significant findings from the report.

Approximately one-quarter (23,4%) of households consisted of a single person, while six-tenths (60,7%) had fewer than four members. North West had the highest incidence of single person households (28,3%) while households that contained more than six members were most common in KwaZulu-Natal (18,9%) and Mpumalanga (18,3%).

Nuclear households that are comprised of parents and children made up 39,9% of all households. The survey shows that 40,1% of households consisted of two generations while 14,7% contained at least three generations.

Almost four-tenths (36,8%) of the 0–4-year-olds attended Early Childhood Development(ECD) programmes and access to these facilities was highest in Gauteng (46,8%) and Western Cape (46,9%). One-half (50,2%) of children aged 0-4 years stayed at home with parents or guardians.

There were approximately 14,6 million learners at school in 2019. Participation in education institutions was virtually universal (96,6%) by the age of 15 years (the last compulsory school age). Approximately two-thirds (64,3%)  of learners were still in school by the age of 18 which usually represents the age at which learners exit grade 12. Almost one-quarter (24,3%) of twenty-year olds were still attending secondary school.

While the percentage of learners who have achieved grade 12 has been increasing, the survey shows that the percentage of individuals who attended post-school education has remained relatively low for youth aged 19 to 22 years of age.

An estimated 44,9% of households had access to piped water in their dwellings in 2019. A further 28,5% accessed water on site while 12,2% relied on communal taps and 2,5% relied on neighbours’ taps. Although generally households’ access to water improved, 3,1% of households still had to fetch water from rivers, streams, stagnant water pools, dams, wells and
springs in 2019. 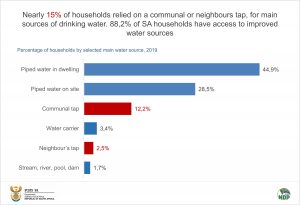 An increase in the percentage of households that were connected to the electricity supply from the mains from 76,7% in 2002 to 85,0% in 2019, was accompanied by a decrease in the use of wood (20,0% to 7,8%) and paraffin (16,1% to 3,9%) over the same period. The common use of wood for cooking purposes in rural provinces such as Limpopo (32,1%) and Mpumalanga (16,7%) is, however, an indication that available resources are still very accessible and, most likely, less expensive than using electricity. One quarter (24,9%) of households did not use electricity for cooking in 2019, preferring to use gas (4,2%), paraffin (3,9%) and ‘Other sources’ such as solar electricity.

For more information on the wide variety of fields covered, download the full report here.