The National Small Enterprise Amendment Bill 2020, gazetted recently, outlines the establishment of an ombud service that will provide legal support to SMMEs.1 The Small Enterprise Ombud Service will handle complaints, resolve disputes and enforce contracts in the sector.

The support of SMMEs recognises the sector as an important driver of economic growth. Data on turnover from the AFS survey show that small businesses in particular have made inroads in South Africa’s formal businesses sector.2

Below are three facts from the survey on small business turnover:

Industries in the South African formal business sector, and included in the AFS survey, generated R10,5 trillion in total turnover in the 2019 financial year. Turnover includes money received from the sales of goods and/or from services rendered, as well as from the leasing or hiring of transport equipment, machinery, equipment, land, buildings and mineral rights.

A breakdown of turnover by business size shows that small businesses were responsible for generating R2,3 trillion (or 22%) of the R10,5 trillion. Medium sized businesses contributed the smallest portion (10%) while large businesses accounted for the biggest chunk, just over two-thirds (68%) of total turnover (click on the image to enlarge). 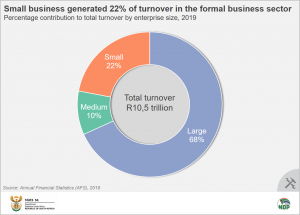 Small business has been flexing its muscles

Small businesses have, without much fanfare, slowly taken over more of the turnover pie. In 2013, small business generated 16% of total turnover in the formal business sector, expanding to 22% in 2019. The contribution of large business waned over the same period, from 75% to 68%. 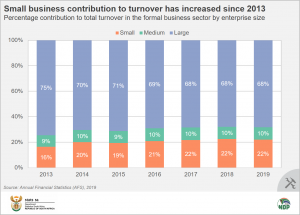 Small business leads the pack, recording an increase of 12,3% per year over the same period.

Small business has increased its influence in construction and business services

Even before the COVID-19 pandemic, the South African construction industry was having a torrid time. In the first quarter of 2020, the industry registered its seventh consecutive quarter of economic decline.3 This was on the back of lower infrastructural investment, weak economic growth, and rising costs.

The ailing fortunes in the industry, exacerbated by the COVID-19 pandemic, have forced a number of large construction companies to file for business rescue.

With fewer large players generating turnover, small businesses have filled the gap. In 2013, small companies accounted for 17% of total turnover in the construction industry, rising to 34% in 2019. Large companies contributed almost two-thirds to total construction turnover in 2013, falling to just over 40% in 2019.

Small business contribution to total turnover in the business services industry increased from 29% to 42% over the six-year period, also eating away at the dominance of large players. 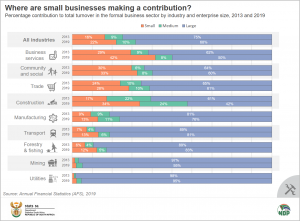 On the other side of the coin, small businesses have much less presence in the mining and utility (electricity, water and gas supply) industries. This indicates that these industries are dominated by a few very large players and have high barriers to entry. Eskom, for example, generates the bulk of South Africa’s electricity supply.

2 The AFS survey measures the financial health and performance of each industry, providing information on turnover, purchases, and capital expenditure. The report sources data from the financial statements of enterprises (i.e. private businesses and public corporations). The AFS excludes agriculture and hunting; government and educational institutions; and financial intermediation, pension funding, insurance and business services ‘not elsewhere classified’.