An update on municipal finances for the quarter ending June 2020

Even though South Africa’s 257 municipalities increased their spending in the quarter ended June 2020, the rise was slower than increases recorded in previous quarters.

This is attributed to a decline in expenditure on items such as general expenses, repairs and maintenance, and ‘other’ expenditure.

Expenditure on repairs and maintenance eased by R689 million.

At first glance, the decline in ‘other’ expenditure might appear counter-intuitive to those familiar with municipal finances. The procurement of personal protective equipment (PPE) by municipalities during the COVID-19 pandemic would be recorded under this line item, driving up expenditure.

The quarter ended June 2020 covers the lockdown months of April, May and June. A number of municipalities indicated that the lockdown period disrupted their operations, resulting in a backlog of uncaptured invoices, including those for PPE. When these invoices are eventually processed, the amounts should reflect in future municipal reports and eventually in Stats SA’s statistical release.

What were the biggest positive drivers of spending and income?

Focussing on the R4,6 billion year-on-year expenditure increase in the quarter ended June 2020, the data show that the biggest drivers behind this rise were employee costs (up by R3,0 billion), bad debts (up by R2,0 billion) and purchases of electricity (up by R1,2 billion).2 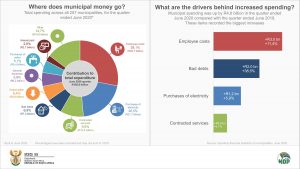 The eight metropolitan municipalities were the biggest contributors to employee costs, accounting for 56,1% of the R29,7 billion. The 205 local municipalities contributed over a third (36,4%) and the 44 district councils 7,5%.

Purchases of electricity was the second biggest expenditure item, accounting for a fifth of total expenditure.

Grants in this case are not social grants. Rather, grants and subsidies here refer to a source of direct funding that consists mostly of financial transfers from national and provincial government to municipalities. These transfers accounted for 26,6% of total income. 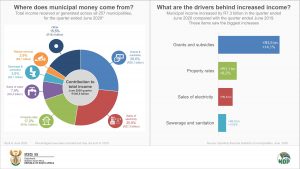 Sales of electricity increased by R822 million, accounting for just over a quarter of total income. Property rates collected by municipalities contributed 17,2% to the total income pie.

For more information, download the latest Quarterly financial statistics of municipalities statistical release here. With effect from the September 2020 quarter, Stats SA will reduce the scope of this publication from 257 municipalities to the 130 largest municipalities. For further information regarding this change, please contact Malibongwe Mhemhe at (012) 310 6928 or MalibogweM@statssa.gov.za.

2 Expenditure figures appear in Table 1 and income figures in Table 2 of the report.