With concerns over job losses in major industries, the tourism sector has shown some resilience in the face of a tough economic climate. In 2017, the sector had its most successful year of job creation in recent times.

The tourism sector created 31 752 net new jobs in 2017.1 This is the most number of net new jobs generated by tourism within a year in at least the last eight years. This also represents the second year of employment growth after the sector saw a net loss of 12 262 jobs in 2015, according to data from the latest Tourism Satellite Account for South Africa. 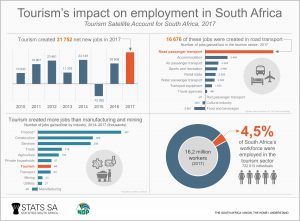 A longer-term analysis of labour statistics shows that the tourism sector is playing a larger role in job creation than other major industries. In the last four years (2014–2017), tourism created just over 64 000 net new jobs, outperforming larger industries such as transport and communication, mining, utilities (electricity, gas and water) and manufacturing.2 The finance and other business services industry was the largest contributor to job creation overall, increasing employment by about 407 000 jobs during 2014 to 2017.

In 2017, one in every 22 employed people in South Africa were working in the tourism sector, totalling 722 013 individuals. This represents 4,5% of the 16,2 million people in South Africa’s workforce. About half of those working in the tourism sector were employed by two industries: road passenger transport and the food and beverages servicing industry.

President Ramaphosa, in his State of the Nation Address in February, stated that tourism provides our country with “incredible opportunities to, quite literally, shine”.3 Acknowledging that tourism performs better than many other industries, the President further stated that there is no reason that tourism employment shouldn’t double in size.

If the tourism sector continues to grow, adding jobs to the economy as it did in 2016 and 2017, the country will be on its way to meeting the President’s goal.4

Other key facts from the Tourism Satellite Account of South Africa 2017 report:

4 Based on the average growth rate in 2016 and 2017, it would take approximately 18 years for tourism employment to double from its 2017 level.