Only 10% of waste recycled in South Africa

Did you know that 90% of an estimated 59 million tonnes of general waste produced in South Africa in 2011 ended up in landfills, while only 10% was recycled?1 The rapid growth in solid waste and the fact that there is a shortage of suitable land to dispose of waste means that South Africa is running out of space for waste disposal. Despite the benefits and need for recycling, studies report that as little as 5,2% of households recycled waste in 2015.2

According to a new report, Environment, in-depth analysis of the General Household Survey 2002–2016, released by Statistics South Africa, 12,9% of metropolitan households self-reported that they recycled, followed by 10,8% of households across urban areas and 3% of households in rural areas. Of the rural households, recycling was more common in households on farms than households in traditional areas.

In recent years much focus has been placed on recycling efforts as a way of reducing the damaging impact of waste on the environment. The National Environmental Management Act (NEMA) of 1998 states that “…waste is to be avoided, or where it cannot be altogether avoided, minimised and reused or recycled where possible or otherwise disposed of in a responsible manner”. Taking this lead, the National Waste Management Strategy (NWMS) had set goals to divert 25% of recyclables from landfill sites for re-use, recycling or recovery; and for all metropolitan municipalities, secondary cities and large towns to have initiated separation at source programmes by 2016. The NWMS had also set a goal that 80% of municipalities should have been running local awareness programmes by 2016.

Although some of us are aware of the environmental and ethical value of recycling, the vast majority of households do not recycle their household waste. More than three-quarters (75,8%) of households that did not separate waste for recycling responded that they did not need to recycle as they could merely throw their waste in the dustbin for refuse collection. 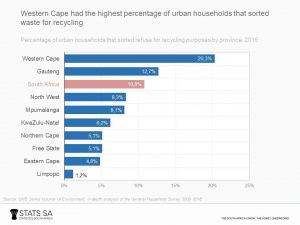 Households headed by young adults aged 18–24 years (5,3%) displayed far lower percentages of recycling than those aged 65 years and older. In fact, almost one in five households aged 65 years and older sorted waste for recycling. These figures support international trends which show that millennials (16–34 years of age) are least likely to recycle, while the oldest age groups are most likely to do so.

The recycling behaviour of households also depends largely on the ability of municipalities to provide adequate refuse removal services. Although more than 80% of municipalities had already initiated some kind of recycling programme by 2007 (DEAT, 2007), municipalities struggled with implementation due to a lack of capacity or infrastructure. More than 90% of recycling households whose sorted waste was fetched by the municipality indicated that it took place on a weekly basis. The percentage of households whose sorted waste was removed on a weekly basis declined to 75,4% for waste removed by companies that were contracted by the municipality, 69,6% for private companies, and 51,3% for cases where waste is disposed of at drop-off points.