Given the vast amount of information appearing in detailed financial statements of companies, it may be difficult to discern significant relationships and trends in the data. One way to address this challenge is to use accounting ratios, which provides substantial insights into the relationships between variables and can indicate certain trends. Accounting ratios are calculated by comparing two or more financial balances where an economic relationship exists (such as profit and sales). The calculated ratio can be compared with an entity’s previous financial results or with the industry standard in which the entity operates. For example, a user may want to evaluate the profitability of a specific enterprise in relation tothe industry standard.Ratio analysis can provide significant insight into the performance and financial position of an enterprise at a specific time and possible future financial assessments.

The Quarterly Financial Survey (QFS) conducted by Stats SA reports, amongst other financial variables of income and expenditure, capital expendture and inventories, selected operating financial ratios for each industry covered by the survey. These ratios include:

The net profit margin ratio also indicates how efficient an industry is and how well it controls its costs. The higher the margin, the more effective the industry is in converting revenue into actual profit.

Figure 1: Comparison of the profit margin ratio for the quarters ended March 2013 and June 2013 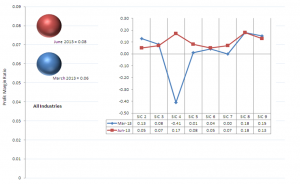 Figure 1 shows a comparison of the profit ratios per industry between the quarters ended March 2013 and June 2013.The all industries profit margin showed an increase from 0,06 to 0,08 between the March and June2013.Four of the eight industries reported an increase in the profit margin ratio during the same period. The largest increase occurred in the electricity, gas and water supply industry, which turned around a loss (-0,41) in the previous quarter to 0,17 profit in the June 2013 quarter; the increase can be attributed to an increase in net profit before tax that was considerably larger than the increase in turnover. Real estate and other business services (excluding financial intermediation and insurance) remained the same (0,18) while the mining and quarrying industry showed the largest decrease, from 0,13 to 0,05.

Financial operating ratios can also be applied to the estimates generated for small, medium and large enterprises. This facilitates comparison between the financial performance and position of the different group size categories within each industry. An entity operating in a specific industry can compare its financial results with other similar industry participants using aggregated values according to small, medium and large estimates.

In the previous article published on the 27 June 2013,it was shown how companies are grouped into large, medium and small subgroups within each industry, depending on their annual turnover. The QFS uses cut-off points determined by the Department of Trade and Industry to group enterprises into small, medium and large categories.

Users can also examine the profit ratios for an industry and size group of their choice. For example, in the real estate and other business services industry, the profit ratio for the industry was unchanged at 0,18 between the March 2013 and June 2013 quarter, indicated in Figure 1. However, the calculated ratios for the small, medium and large size companies in the same sector indicated that the profit ratio for large enterprises remained unchanged, at 0,14, whereas for the medium and small size groups the profit margin ratios have changed. The medium size enterprises showed a decrease in this ratio, from 0,18 to 0,11, while small size enterprises showed an increase, from 0,22 to 0,23 (see Figures 2 and 3). 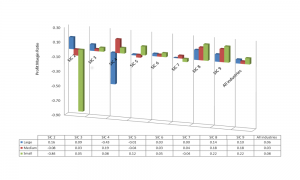 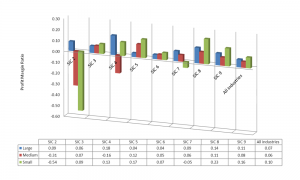 The results of the QFS survey (which covers a sample of 5000 private and selected public enterprises operating in the formal business sector of the South African economy, excluding agriculture, financial intermediation, insurance and government institutions) are published three months after the reference quarter. The QFS publication also allows for various other types of analysis, using the different variables contained therein. Readers are encouraged to delve into the various relationships using the QFS data, either at the aggregated or small, medium and large diasggregated level (the data being accessible from the Stats SA website). Estimates for small, medium and large categories for each industry are available in Excel and are published at the same time as the QFS statistical release.