Economic, social and political empowerment are critical for achieving gender equality in SA

More than half (51,1%) of the South African population are female[1] and, according to the General Household Survey (GHS) 2021, more than two-fifths (42,0%) of households are headed by females. While women empowerment is central to the global development agenda and is a stepping stone to gender equality, a new report released by Statistics South Africa titled Gender Series Volume IX: Women Empowerment, 2017–2022  shows that women in SA are more likely to be unemployed than men and are less likely to participate in the labour market than their male counterparts.

The Constitution of the Republic of South Africa promotes non-discrimination, including on the basis of gender. In line with gender equity goals, this year’s Women’s Month was celebrated under the theme: ‘Women’s Socio-Economic Rights and Empowerment’, with the aim of raising awareness to elevate women’s socio-economic empowerment and advancement.
The working-age population in South Africa was estimated to have increased by 2,9 million from 37,1 million in 2017 to 40 million in 2022. Despite the number of females in the working-age population exceeding males, their participation rates in the labour force remained lower at 50,7% in 2022 compared to 63,2% for males. A gendered perspective of labour market participation showed a linear relationship between the number of children in the household and participation rates, irrespective of sex. In 2022, participation rates were lowest among males and females who lived with 5 or more children at 39,6% and 38,2% respectively, increasing by 1,5 percentage points for males and 1,3 percentage points for females. 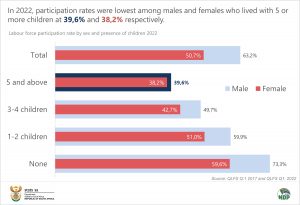 The findings indicate that the decline in the employment rates for males and females was almost equal at 6,9 and 6,1 percentage points respectively. When looking at occupation, working for households as a domestic worker was prevalent among females. The second most common occupation for employed females was working as a clerk; more than two-thirds (72,2% in 2017 and 68,9% in 2022) reported being in this occupation.

Analysis of employed individuals with tertiary qualifications showed varying gender gaps in different fields of study. In 2017, approximately three-quarters (74,5%) of employed males with tertiary education were physics/mathematics or engineering graduates, decreasing slightly to 73,2% in 2022, with a wide gender gap of 0,34 in 2017 and 0,37 in 2022. On the other hand, arts/education/hospitality graduates were more likely to be females, showing a gender parity ratio of 2,11, which doubled to 5,54 in 2022. Gender Parity Ratio (GPR),  is a numerical value related to gender equality of women and men, girls and boys, and is often calculated as the ratio of female-to male values for a given indicator. A GPR of 1 indicates parity between males and females. The further the GPR lies from 1, the greater the disparity between the males and females.  A GPR less than 1 indicates disparity in favour of males and a value higher than 1 indicates disparity in favour of females

These findings confirm gender stereotypes in choosing fields of studies and, subsequently, occupations; the slow entry of women into specialized fields, traditionally associated with males, will delay gender representation within those fields, particularly in top management positions.
Overall, unemployment rates increased from 27,7% in 2017 to 34,5% in 2022, with those between the ages of 25–34 years accounting for the most unemployed when compared to other age groups. The Eastern Cape had the highest unemployment rates for males and females in 2022. In general, females have higher unemployment rates, with Free State showing the largest gender gap. Unemployment rates in 2017 and 2022 were highest among males and females who lived with 5 or more children at 43,6% and 55,5% respectively. 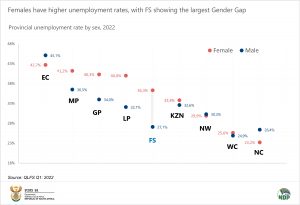 Empowerment of women is core to South Africa’s processes of sustainable development. Leaving no one behind means addressing multiple and intersecting forms of discrimination and inequalities. The report explored social empowerment from the perceptions of social gender norms to ascertain gender equality and understand the progress made in the public and private sectors in adhering to the Employment Equity Act.
In the public sector, males occupy most senior management positions (SMS) and middle management positions (MMS). The composition of SMS positions ranged from 58,4% in 2018 to 56,2% in 2021, while their female counterparts occupied 41,6% in 2018 and increased slightly to 43,8% in 2021. Younger (<=35 years) females were more likely to hold MMS positions than their male counterparts. 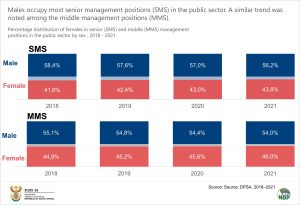 Achieving gender equity in positions of decision-making – both in government and in the private sector – is crucial to providing females with responsibilities for planning, making decisions, recommending policies, and coordinating empowerment efforts.

Findings from local government showed that, nationally, males were more likely to hold mayoral positions than females (68,0% vs 32,0%). The North West was the only municipality that reached parity regarding mayoral positions. Western Cape and Gauteng had the lowest representation of female mayors.  Females constituted 40,9% of the municipal councillors in the country while the lowest representation of female councillors was observed in Western Cape and KwaZulu-Natal.

The National and municipal voters’ roll showed that females made up more than half (55,0%) of all registered voters. The results show that the voter turnout for females in the 2019 general election (57,3%) and the 2021 local government elections  (58,4%) was higher than that of males.

Despite some progress, more still needs to be done in order to achieve Sustainable Development Goal 5: Gender Equality by 2030.