Nearly half of SA women are out of the labour force in Q2:2022

Globally, women who are looking for work and are available to work have a tougher time finding work than men. This phenomenon is more pronounced in South Africa, with higher unemployment rates for the general population as compared to the rest of the world.

In 2022, 47,0% of South African women were recorded as economically inactive. This means that almost half of the working age women in South Africa are out of labour force compared to 35,6% of their male counterparts. The latest global labour force participation rate for women is about 47% compared to 72% for men (ILO,2022). The productive potential of South Africa women in the labour market remains unused. 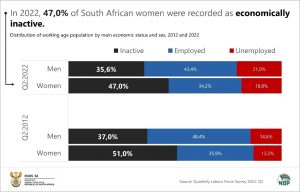 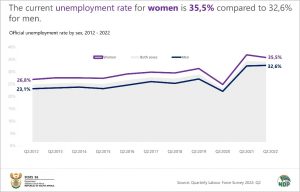 In South Africa, the labour force participation rate for women in Q2:2022 is 53,0% as compared to 64,4% for men, a gap of 11,4 percentage points. The absorption rate represents the share of the working age population that is actually used by the economy. Women have the lowest absorption rate at 34,2% in Q2:2022, lower than their male counterparts at 43,4%. The noticeable gap between men and women in terms of absorption rate can be observed over the period 2012 – 2022.

Women who do find work are usually employed in vulnerable employment (often characterised by inadequate earnings, low productivity and difficult work conditions) compared to men. 5,8% of employed women occupy management positions, compared to 9,8% of employed men. The occupations that contributed the largest share of employment among women include Elementary (22,3%), Sales and services (18,5%), Clerk (16,4%), Domestic workers (11,9%) and Technician (11,2%) in Q2:2022. In the same period, men recorded the largest share in Elementary (24,4%), Craft and related trade (17,2%), Sales and services (15,0%) and Plant and machine operator (13,4%). 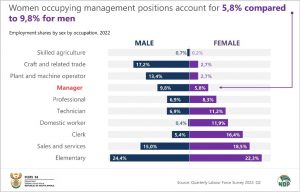 Women in South Africa and across the world want to care for their families and be in paid jobs, not one over the other (ILO,2022).

The United Nations observance of International Women’s Day held on the 8th of March 2022 was themed “Gender equality today for a sustainable tomorrow”. Lack of gender equality continues to be a heavy burden for women all over the world, more than a century after the first protest in 1908 by women for better working conditions.

The fight for gender equality is remembered in South Africa every year in August. In 1956, South African women from all walks of life united in protest against a system that discriminated against women using pass laws. This year’s South African Women’s Month is celebrated under the theme: “Women’s Socio-Economic Rights and Empowerment: Building Back Better for Women’s Improved Resilience”.

Globally, and in South Africa, the discrimination of women in the labour market persists. It is harder for women to find work compared to men. Women that find employment are often employed in low paying jobs, where improvement prospects are limited (ILO,2022).

According to the Global Gender Gap Report 2022, gender parity is not getting better. With the rising global crises, it is women who suffer the most, worsening the existing negative labour market outcomes for women.