In 2021, close to 3% of 15-year-olds and nearly 9% of 17-year-olds dropped out of school. The General Household Survey, 2021, released by Statistics South Africa, indicates that although most 18- and 19-year-olds were still attending secondary school, almost three out of 10 pupils aged 18 years (29,3%) and 4 out of 9 (46,3%) of 19-year-olds had dropped out of school. The majority of 20-year-olds were not in education, with approximately 23% attending university, TVET or other colleges, while 18% were still attending high school.

The most prominent reasons for non-attendance of school in 2021 included illness and disability (22,7%), poor academic performance (21,2%) and lack of money for fees (19,6%). Reasons given for dropping out of school differ by gender, especially for females who have to stop attending school due to family commitment (13,4%), while close to 5% of males stopped attending because they had no interest in education.

The school dropout rate is of particular concern because students who drop out of school prematurely will experience a lack of access to higher education, fewer job opportunities and  lower wages than their peers who finished their schooling.
According to the report, the 20-year-old age group is the largest group attending tertiary education, followed by the 21-year-olds (20,4%). By age 24, close to 8% were attending a tertiary educational facility with close to 90% of youth not in education. 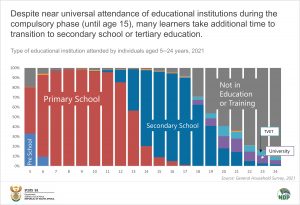 In 2020, a rapid increase in the number of out-of-school children and youth in South Africa was noted. This was mainly due to school closures during the COVID-19 lockdown in 2020. Distance learning was not an effective measure in South Africa as access to digital learning was limited. In 2021, when schools could still not be fully open, most schools settled for in-school learning with some form of hybrid model entailing instructions of rotational attendance combined with distance education. However, the percentage of out-of-school children aged 5–18 remained high in 2021 compared to 2019, while a relative reduction was observed compared to 2020. 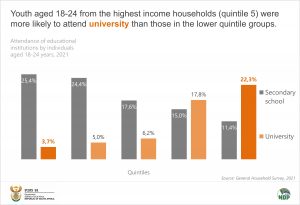 Attendance of educational institutions among youth aged 18–24 in 2021 was relatively high, although a clear lag in completion of grades linked to socio-economic status was noticed. The percentage of individuals aged 18-24 still attending secondary school was higher for those from households in the poorer income groups (quintiles 1 and 2)1 than those from households in the higher income groups (quintiles 4 and 5). Conversely, youth aged 18-24 from the highest income households (quintile 5) were more likely to attend university than those in the lower quintile groups. 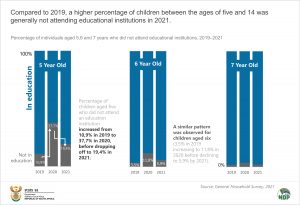 Attendance of educational institutions was particularly high among children within the compulsory school age bracket (age 7–15); while attendance among younger children aged 5–6 was the lowest. In 2020, non-attendance of educational institutions among children aged 5–6 tripled when compared to 2019. Furthermore, in 2021, participation in education in this age group increased but did not go back to the 2019 levels.

This indicates that the early childhood development (ECD) phase was particularly affected by the COVID-19 pandemic and lockdown restrictions.  Since some ECD programmes remained closed, parents preferred to keep their children at home. Non-attendance of school increased from age 15 and was the highest among 18 year-olds.

There was an overall decline in the percentage of children aged 0–4 who attended Grade R and pre-school, from 36,8% in 2019 to 28,5% in 2021. This was prevalent in disadvantaged areas. The highest decline was observed in North West with a reduction in attendance of 14 percentage points followed by Mpumalanga and Limpopo at 11,9% and 11,2% respectively. However, the attendance of ECD remained unaffected in the Western Cape compared to previous years.  In 2021, the attendance of ECD among young children was the lowest and was below the national average in Northern Cape (16,4%) followed by North West (18,6%) and KwaZulu-Natal (18,8%). 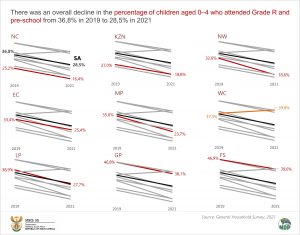 Participation in education among young children is often linked to the socio-economic status of the household. In 2021, attendance of school or ECD facilities was 18,1% in the poorest income group (quintile 1) and almost tripled to 60,3% for the highest income group (quintile 5). Inversely, children in poorer households (quintiles 1 and 2) were more likely to stay at home with parents or guardians. 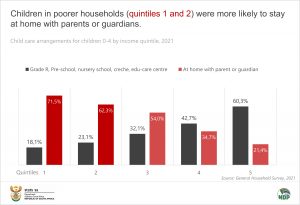 The General Household Survey (GHS) also tracks the progress of development across a wide variety of fields in South Africa such as health, housing, refuse removal and disability, as well as identifying service delivery gaps.

For more information on these topics, download the full report here.

[1] An income quintile is a method to measure the average (per capita monthly) household income of residents, ranking them from poorest to wealthiest, and then grouping them into five income quintiles (1 being poorest and 5 being wealthiest), each quintile containing approximately 20% of households.