The COVID-19 pandemic has had serious implications for the global economy, with food security and nutrition being particularly impacted. South Africa, like many countries around the world, has not been spared. According to a report released by Statistics South Africa, Measuring Food Security in South Africa: Applying the Food Insecurity Experience Scale, almost 23,6 per cent of South Africans in 2020 were affected by moderate to severe food insecurity, while almost 14,9% experienced severe food insecurity.

The World Food Summit of 1996 defined food security as existing when all people have access to sufficient, safe, nutritious food to meet their dietary needs for an active and healthy lifestyle at all times. Food insecurity occurs when people’s access to food is minimally adequate and they have trouble meeting their basic needs, while severe food insecurity occurs when there is a critical lack of access to food. As food insecurity becomes severe, the quantity of food consumed decreases and some meals are skipped. The most severe situation is characterised by feeling hungry because of not being able to eat and even not eating for an entire day, due to lack of money and other resources.

Statistics South Africa (Stats SA) has been working on improving its measurement of food security and recently introduced the Food Insecurity Experience Scale (FIES) module in the 2019 General Household Survey (GHS). The results of this report were compiled using the Food Insecurity Experience Scale (FIES) module. FIES is one of the official indicators adopted by the United Nations in the context of the Sustainable Development Goals 2 (SDG 2) that calls for ending hunger and achieving food for all people by 2030. FIES allows for cross-country comparisons while other experiential scales of food insecurity employ national thresholds, which raises concerns around monitoring progress towards SDGs and cross-country comparability. Since food insecurity is a global phenomenon it is important to measure it using tools that guarantee comparability across countries.
The results of the FIES analysis indicate that the proportion of the population affected by moderate food insecurity plus the population classified as severely food insecure was 17,3% (10,1 million) in South Africa in 2019, while those classified with severe food insecurity was 7% (4,1 million). The female population was the worst affected by both moderate to severe food insecurity and severe food insecurity when compared to males. 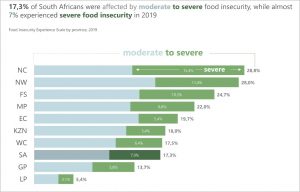 In 2019, almost one in every five black Africans was affected by the prevalence of moderate to severe food insecurity, followed by coloureds at 16,1%. Indians/Asians and whites were least affected.

The effects of the COVID-19 pandemic denied many South Africans their right to adequate food as enshrined in the South African constitution, and undermined the efforts that have been made to meet the National Development Plan’s goals and the United Nations Sustainable Development Goals (SDGs) of “Zero hunger” by 2030.

Unemployment can also negatively affect a household’s food security status. Lockdowns triggered by the COVID-19 pandemic caused major economic disruptions and contributed to loss of livelihoods and income. Between 2017 and 2020, household unemployment (no member of the household was employed) in SA increased. Those most affected were female-headed households, as almost half of female-headed households did not have an employed person in 2020. Provinces with the highest proportions of households without an employed person in 2020 were Limpopo (47,8%), Eastern Cape (47,3%), Free State (45,3%) and North West (43,0%).