Annual consumer inflation held steady at 5,7% in February, unchanged from 5,7% in January. Rising food and transport prices put upward pressure on the monthly rate, with the consumer price index (CPI) increasing by 0,6% between January and February. 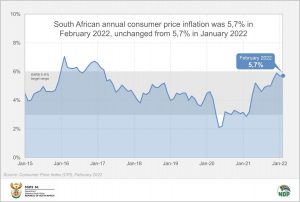 This CPI release is the second to be compiled using the recently updated weights and basket of goods and services.1 The price indices have also been rebased so that December 2021 = 100.2

Annual food and non-alcoholic beverages inflation continued to rise in February, with the rate increasing to 6,4% from 5,7% in January and 5,5% in December.

After decreasing steadily for eight months, annual bread and cereals inflation jumped to 3,7% in February from 1,5% in January. This category includes grain-based foods made from wheat, rice and maize. The monthly change was also significant: prices climbed by 2,4% between January and February, representing the biggest monthly increase for this category since the beginning of 2019.

A number of bread and cereal products registered large monthly price increases, most notably staples such as maize meal (up by 3,7%) and white bread (up by 3,2%). In rand terms, a loaf of white bread was on average 69c more expensive in February than in January, up to R16,16 from R15,47.

With much focus on the war in Ukraine and the impact that this might have on grain supply, price movements in the bread and cereals category will be closely watched in the near future.

Your fish and chips dish may have become more expensive too. The other food category that recorded a sharp rise was fish, increasing by 2,3% between January and February. Within this category, tinned fish (excluding tuna) and frozen fish fingers recorded the largest monthly increases.

Fuel prices increased by 2,9% in February after softening in January. The price of inland 95-octane petrol climbed by 53c from January to reach R20,14 per litre, shy of the record high of R20,29 reached in December.4

Large monthly price increases were recorded for public transport services, in particular air fares (up by 7,3%) and car rental (up by 15,0%).

Stats SA conducts an annual survey of private-sector doctor and dentist fees in February. Health prices increased by 4,9% in the twelve months to February. Prices for general practitioners increased by 5,6%, gynecologists and physicians by 4,5%, and dentists by 4,7%.

The insurance category registered a monthly change of 1,3%, mainly due to an increase in health insurance (up by 1,8%). Not all health insurance companies change their prices during February, however. Stats SA will also capture these prices in April, May and September.

2 See Figure 1 and Table B1 in the February 2022 CPI statistical release for the headline index.