Healthcare and education spending: GP and WC the odd ones out

Provincial government plays a vital role in the administration of the country’s health and education systems, responsible for providing basic education to learners and healthcare to those in need.

Not all provinces are equal

The Western Cape and Gauteng administrations are the two provinces that spend slightly more on healthcare than on education. This is in contrast to the other seven provinces where education is the biggest expenditure item. 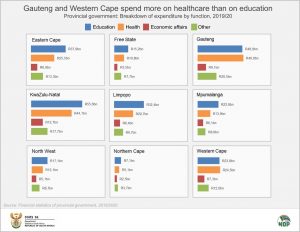 There could be a variety of reasons for this, but it’s interesting to note that Western Cape and Gauteng have the oldest populations compared with the other provinces. According to the latest Mid-year population estimates data1, those aged 35 and above accounted for 42% of the population of Western Cape, and 40% of the population of Gauteng. The national figure is 37% and the province with the lowest percentage is KwaZulu-Natal at 34%.

Interestingly, the provinces with the largest contributions to hospital services, as a percentage of total healthcare spending, were Gauteng (68%) and Western Cape (65%). Hospital services includes the operations of all government hospitals, both general and specialist, as well as medical centres, nursing homes and maternity centres.2

Public health, the second biggest item, includes a variety of services, including the detection and prevention of diseases, infant and child health monitoring, epidemiological data collection, family planning and blood-bank operations.2 The provinces that spent the most on public health, as a percentage of total health spending, were Mpumalanga (46%) and North West (42%).

Paramedical services, which accounts for 4% of total healthcare spending, includes the operations of clinics administered by paramedical personnel, such as midwives, nurses, physiotherapists, and occupational therapists.2 Free State (8%), Northern Cape (7%) and Western Cape (5%) were the provinces that spent the most on paramedical services, as a percentage of their total healthcare spending.

Eastern Cape was the only province that didn’t follow this pattern, with secondary education the biggest education expenditure item, followed by pre-primary and primary.