There is no doubt that South Africa has made significant progress towards achieving gender equality since 1956, when 20 000 women marched to the Union Buildings on 9 August in protest against the extension of Pass Laws to women. Activists rebelled against a patriarchal system designed to control women and reduce them to submissive beings at the mercy of men.

As part of the global movement towards achieving gender equality by 2030, South Africa celebrates this year’s Women’s month under the theme: “Generation Equality – Realizing Women’s Rights for an Equal Future”.

Today, South Africa’s progressive laws have seen more women serving in high-ranking positions in government than ever before. Access to education by young girls and women has improved substantially over time. Recent statistics1 depict a balance in gender parity ratios (GPR) amongst those who are functionally literate from 0,95 in 2002, to 0,99 (zero – no gender equality to one – full gender equality) in 2019, indicating that more women are now literate.

In SA and globally, one of the biggest challenges facing women is educational inequality. Access to education has played a pivotal role in ensuring that women have progressed to higher education levels. According to the Sustainable Development Goals (SDG) 2019 country report, GPR for female participation in tertiary education was 1,39 during 2016, underpinning the fact that significant strides have been achieved in ensuring universal access to education for everyone.

Educational and employment inequality still exists.
However, amidst all this, the female unemployment rate has remained higher than that of their male counterparts. This is indicative of apparent disparities between men and women in different facets of life, which leaves women lagging behind in terms of socio-economic opportunities. According to the unemployment figures from the QLFS Q1: 2021 released by Stats SA, unemployment rates for males and females were 31,4% and 34,0% respectively. Of these, black African women were the most vulnerable with an unemployment rate of 38,3%. Disparities by sex and occupation show that females accounted for 31,2% of those occupying managerial occupations. In addition, more women (56,2%) than men tended to be discouraged from participating in the labour market. In both Q1: 2020 and Q1: 2021, more than four in every ten young females were not in employment, education or training. Females were more likely to offer “family commitment” as a reason for not attending school than males (17,1% compared to 0,3%) 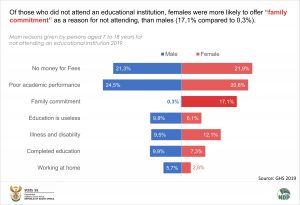 In terms of the perceptions on income being the catalyst for women to be independent, results of the Governance, Public Safety and Justice Survey (GPSJS) showed that only 55,6% of males believed that earning an income was the best way for women to be truly independent. On average, 64,7% of South Africans believed that women earning more than their partners would almost certainly cause trouble; 67,5% of males and 62,2% of females agreed with this statement. The country’s gender pay gap is highlighted in the QLFS 2018 report, which showed that the median monthly earnings were below parity at 0,76 in 2018, an improvement from 0,71 in 2013. 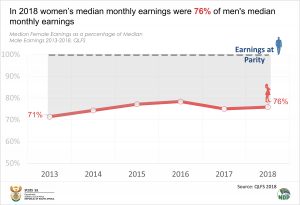 Teenage pregnancy and gender-based violence hinders progress
Issues related to teenage pregnancy significantly impact the empowerment of women. In 2019, almost 6% of girls between 14 -19 years of age were at different stages of pregnancy during the 12 months prior to the survey. Even though young girls are allowed to attend school while pregnant, other challenges such as financial and family support and discrimination and victimisation from society exist, that hinders them from progressing to higher levels of education. Evidence shows that women of childbearing age who had their first birth at age 15-19 and 20-24 are less likely to attain a tertiary qualification compared to those who had their first birth later in life.4 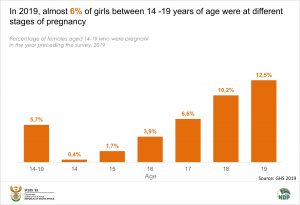 Gender-based violence is another major societal challenge in South Africa. While it is encouraging to note from the Governance, Public Safety, and Justice Survey (GPSJS) that most people do not justify wife-beating, some believe it is justifiable under certain circumstances. About 5,6% of the population believes that it is justified for a man/husband to beat his partner/wife if she has sex with another man or woman, and about 3,3% believed it is justified to do so if she neglects the children. According to the SADHS 2016, one in four (26%) ever-partnered women age 18 or older have experienced intimate partner physical, sexual, or emotional violence in their lifetime.5 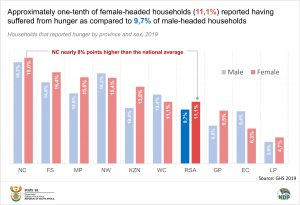 While notable progress has been achieved in the fight for gender equality, eradication of key challenges highlighted in this article will enable young girls and women to improve their socio-economic well-being and lay claim to their fundamental human rights.