Families and parents are key to well-being of children

Did you know that in South Africa, about one-fifth (21,3%) of children aged 17 years and less, did not live with their parents? It may also surprise you to hear that this is against the international norm where the majority of children under 18 live with both their parents.1 However, in South Africa, children are more often not co-resident with their biological parents. This is mainly due to labour migration of the parents as well as low marital rates of mothers. Consequently, many children are raised by their grandparents or other relatives, especially in rural areas.

With the focus on International Day of Families (15 May) and Global Day of Parents (1 June) let’s explore families and their support systems in South Africa. 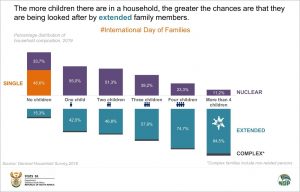 On International Day of Families (15 May), we appreciate the role played by families and extended families, especially grandparents who can share stories, skills and teachings, passing on cultural teachings and traditions, including language, to their grandchildren.

In South Africa, the more children there are in a household (more than 4 children), the greater the chances are that they are being looked after by extended family members (84,5%). Ultimately, it is the family who are responsible for shaping our children and influencing their values, skills, socialisation, and security during their childhood development stages. 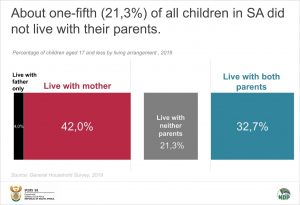 Families and households are the most important socioeconomic institutions and play important roles in the care and development of children. Families and care arrangements for young children are particularly important for vulnerable children. However, in South Africa, government support for parenting and families are limited. Significant gaps exist in nutritional services and in providing care and learning opportunities for young children.2

It is often parents who make the greatest sacrifices for their children to ensure and promote children’s safety and wellbeing. We salute these hard working and dedicated parents, both biological and non-biological, on this Global Day of Parents 2021, especially during the COVID-19 pandemic.