Mining loses shine for the second year in a row

Exactly a week after delegates closed the 26th Investing in African Mining Indaba, Stats SA released data on the performance of the mining industry in 2019.

Despite a positive showing from both copper and manganese, a slump in gold and diamond production in 2019 dragged overall mining down. Iron ore, platinum group metals (PGMs) and chromium also disappointed (click on the chart to enlarge). 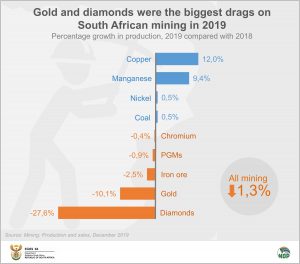 Production followed the usual seasonal pattern, as illustrated by the chart below. Mining activity tends to fall off in January and peak in June. 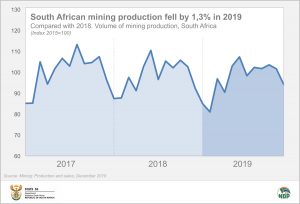 Below is a quick rundown of key movers in 2019.

It must be hard being a gold miner. Once the darling of South African mining, the precious metal has experienced a consistent decline in production over the last few decades. It is disconcerting to realise that the gold industry has experienced just two years of positive growth since 1994 (these being 2002 and 2013). 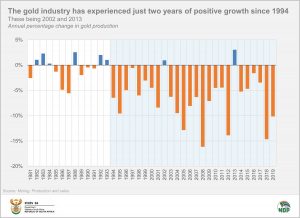 Hampered by a five-month long strike that started at the end of 2018, January 2019 is infamous for being the worst month for gold production in decades.1 Although production recovered on a monthly basis during much of the year (see chart), its start from a low level resulted in 2019 recording an annual drop of 10,1% compared with 2018. Between 2017 and 2018, production fell by 14,6%. 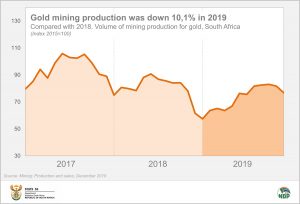 The dual personality of gold might offer some hope. The metal rides on two separate markets. Retail demand for gold – think of jewellery and circuit boards – fell globally in 2019. The investment demand for gold, however, saw a rise over the same period, driven mostly by uncertainty over the global economy. Gold-backed exchange-traded funds (ETFs) were in high demand. Central banks continued buying gold over the course of the year. This supported the price of gold. Only time will tell if this will eventually translate into higher production.

Despite lower production in 2019, the value of gold sales was the third biggest in the South African mining industry after coal and PGMs, accounting for 13,7% of total sales.

The diamond industry had a rough year in 2019. An oversupply of polished gems and rough stones in the market, together with weak prices and subdued demand, placed pressure on producers.

South African diamond production failed to weather the global doldrums, falling by 27,6%, making it the second biggest drag on overall mining output in 2019 after gold.2 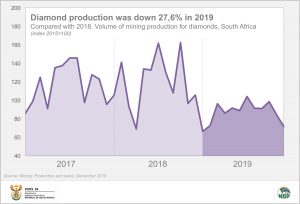 Platinum looks on as its cousins ride high

Rhodium and palladium shot the lights out in 2019. Prices for the two members of the PGMs family3 skyrocketed over the course of the year. Much stricter emission laws in Europe and China prompted car manufactures to produce more petrol and fewer diesel engines. This drove the rise in the demand for palladium, the preferred metal used in catalytic converters for petrol-fuelled cars. The appetite for platinum, the choice for diesel engines, was more subdued. 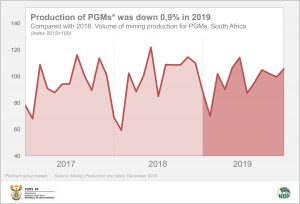 The good news to come out of the industry in 2019 was the conclusion of relatively successful wage negotiations between platinum producers and labour. This averted a repeat of the devastating 2014 strike.

PGMs contributed 24,7% of total mineral sales in 2019, placing it in second place after coal.

World demand for coal fell for the first time in two years in 2019, according to The Guardian (quoting a report from the International Energy Agency).4 European countries and the United States continue to replace coal-fired power plants with renewable alternatives, driving down demand. It remains to be seen, however, whether this is the start of a long-term trend.

South African coal production edged up by 0,5% in 2019, following on from a 0,4% rise in 2018. The year was marked by a significant drop-off in December, mainly the result of heavy rains. 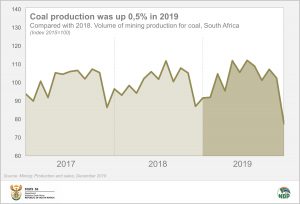 Coal contributed 25,4% to total mineral sales in 2019, making it the most important mineral in the South African mining industry.

What might 2020 hold for South African mining? Stats SA releases production data on a monthly basis and the first set of 2020 results (for January) will be published on 12 March. So watch this space!

2 The extent of downward drag is calculated after applying value added weights to the percentage changes. Gold has a much higher weight than diamonds.