Falling prices: the good, the better, and the best

It’s hard to believe. It goes against what we often hear. Whether chatting with friends around the braai or debating with family at the dinner table, almost everyone has a story to tell about their own experiences with rising prices. Surprisingly, data show that there are in fact items that are cheaper now than they were at the beginning of the year.

Cash-strapped South Africans have had to deal with rising prices for a number of consumer items, according to data from Stats SA’s latest Consumer Price Index (CPI) statistical release.1 During 2017, consumers have had to fork out more money to pay for the costs of education, medical services, insurance, water, electricity and meat.

Happily for consumers, the data show that there are other items for which prices have actually come down, if we compare the latest figures from August 2017 with those recorded in January 2017. 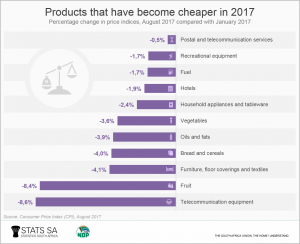 The good: fuel and appliances

If you prefer using 93 octane petrol and you live inland, filling a 45 litre tank in August would have set you back R577 compared with the R589 it would have cost you in January. A savings of R12 might not seem like much, but for many of us, every cent counts!

Fuel overall was 1,7% cheaper in August than it was in January. However, the year is not over yet. Fuel prices increased between August and September, and the recent adjustment in fuel prices in October saw the price of 93 octane petrol rise by 25 cents from R13,49 to R13,74 per litre.2 The extent to which these changes will impact inflation will only be fully revealed in Stats SA’s CPI releases in October and November.

Household appliances and tableware prices fell by 2,4% in August compared with January, with price decreases recorded for irons, kettles, toasters and washing machines. The average price of a new washing machine, for example, fell by R216 over this period, from R4 656 to R4 440.

The better: bread, butter and vegetables

South Africans spend more money on beer than vegetables, as revealed in a recent Stats SA article.3 For those of you that prefer your greens over your hops, however, it might come as some comfort to learn that vegetable prices fell by 3,6% in the first eight months of this year, after rising rapidly in the second half of 2015 to peak in early 2016.

Lettuce, tomatoes, pumpkins and potatoes in particular will provide some cash relief to your healthy lifestyle.

Bread and cereal prices have also eased over the course of this year, after rising quite steeply in 2016. With crop production recovering from one of the worst droughts in recent history, bread and cereal prices dropped by 4,0% in August compared with January. Rusks and bread flour are notable items that have fallen in price.

Together with bread products, margarine (and other oils and fats) is also cheaper, making your lunchtime sandwich that much more cost effective.

The best: fruit and telecommunications

Bananas, plums and pineapples contributed to fruit prices falling by 8,4% in August compared with January. The last time the fruit price index was around this level was in June 2016.

The price index for telecommunication equipment continued on its long-term download trend, falling by 8,6% in August compared with January. The average price for a cellular phone, for example, decreased by R82 from R2 622 in January 2017 to R2 540 in August 2017. Since January 2014, overall prices for telecommunication equipment have fallen by 36%!

With South African budgets having to cope with rising prices in general, it’s good to know that there are nevertheless some items for which we are getting more for less.