An update to municipal spending and revenue (March 2020)

The latest Quarterly financial statistics of municipalities report shows that the biggest contributors to the R10,6 billion rise were employee costs (up R4,6 billion), ‘other’ expenditure (up R2,6 billion) and general expenses (up R1,7 billion).1

Included in ‘other’ expenditure are items such as repairs and maintenance, remuneration of councillors, departmental fees and consumables. General expenses include items such as rental, plant and equipment hire, audit fees, accommodation and travelling costs.

Municipalities spent less on contracted services (down by R585 million) and purchases of water (down by R340 million).

Employee costs, which includes salaries and wages of municipal staff, contributed 31,3% of total spending in the quarter ended March 2020 (click on the image to enlarge). 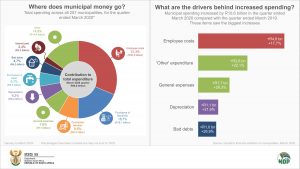 Electricity purchases was the second biggest expenditure item for local government, contributing 18,7% of total spending. Municipalities buy electricity in bulk and then resell the power to homes and businesses. Contracted services was the third biggest item (8,5%), followed by general expenses (7,6%) and depreciation (6,2%).

These transfers are a vital source of money for many municipalities, accounting for 30,0% of total revenue in the quarter ended March 2020. 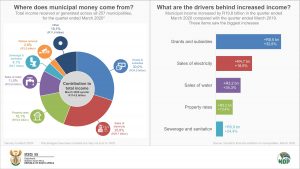 Grants and subsidies provide many municipalities with the fiscal means to provide basic services, especially to poorer households.

Electricity sales increased by R4,7 billion, due to increases in municipal tariffs. Sales of electricity accounted for a quarter of total revenue, followed by property rates and sales of water.

1 Expenditure figures appear in Table 1 and income figures in Table 2 of the report.