The South African economy contracted by 1,4% in the fourth quarter of 2019, following a contraction of 0,8% (revised) in the third quarter.1 Transport and trade were the main drags on overall activity, according to the latest gross domestic product (GDP) figures. 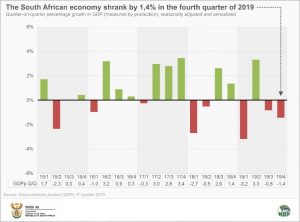 Seven of the ten industries contracted in the fourth quarter. Finance, mining and personal services managed to keep their heads above water, but this was not enough to prevent the economy from sliding into its third recession since 1994.2 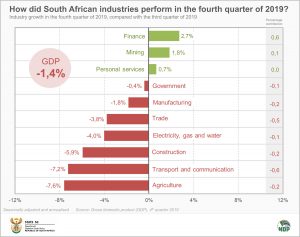 Retail trade sales and restaurant trade were up in the fourth quarter, but this was insufficient to counteract the fall in motor trade, wholesale and accommodation, which dragged the trade industry lower by 3,8%. The industry was the second biggest drag on the GDP.

The country produced less motor vehicles and transport equipment in the fourth quarter, contributing to the 1,8% dip in manufacturing. Wood, paper and publishing production was also down, further hurting the industry.

Petroleum production was up, however, as a result of recovery from plant maintenance in the previous quarter, but this was not enough to lift overall manufacturing growth into positive territory.

The prize for the longest losing streak goes to construction. With its sixth consecutive quarter of economic decline, the beleaguered industry has only seen one quarter of positive growth since the beginning of 2017.

Non-residential construction fell sharply in the fourth quarter, with approvals for office space construction – in square metres – falling to its lowest point in two decades.3

Agriculture experienced its fourth consecutive quarter of negative growth, falling by 7,6%. Late rains and heatwave conditions across the country – in particular Eastern Cape and Free State – affected the production of field crops. The country also produced less horticulture products in the fourth quarter.

Ironically, as drought affected one industry, heavy rains damaged another. Flooding at some power stations and disruptions to coal deliveries caused by rain contributed to the electricity, gas and water supply industry’s poor showing in the fourth quarter.

The industry didn’t escape the shock of the heatwave either. Falling dam levels in various parts of the country resulted in water restrictions, reducing activity in the water supply industry.

The number of civil servants employed decreased across all levels of government, with the exception of municipalities. This dragged the industry lower by 0,4%. In particular, contracts for part-time employees came to an end across a number of higher education institutions. There were also a number of terminations and retirements across other spheres of government.

Mining growth in the fourth quarter was driven largely by platinum group metals, iron ore and gold. Coal production fell in the quarter, mainly as a result of lower demand and heavy rains affecting production. Manganese and diamonds also pulled growth lower. The growth of 1,8% contributed only 0,1 of a percentage point to the growth of the economy.

For a more detailed overview of how mining fared in 2019, take a look at this article.

The finance industry once again posted positive growth, showing resilience against tough economic conditions. The industry, which includes banking and insurance services, has enjoyed consistent growth over the last decade. The increase of 2,7% contributed 0,6 of a percentage point to overall growth.

This quarter’s GDP figures also provide an overview of the latest calendar year. The South African economy grew by 0,2% in 2019, the lowest reading since 2009 when the economy contracted by 1,5%. 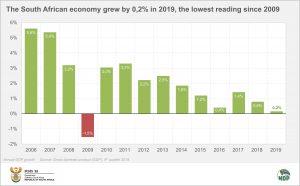 Agriculture was the main drag on growth in 2019, followed by construction, mining and manufacturing. Finance and government were the main positive contributors to growth.

3 This is the lowest reading for building plans passed (for office space) in a quarter since 2000 when the current data series began. This is according to data in the December 2019 Selected building statistics of the private sector as reported by local government institutions release (available here).