“Better lives with better economic statistics.” This is the theme for African Statistics Day 2017, taking place on 18 November. In celebration of this prestigious day, Stats SA explores the archives to find four facts on the South African economy that you might have missed.

These four facts cover aspects of the South African economy that have an influence on issues around employment, poverty and the natural environment. 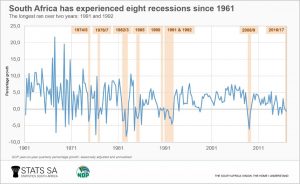 Using the widely accepted measure of ‘recession’ as two (or more) consecutive quarters of negative growth (real GDP quarter-on-quarter), South Africa has experienced eight economic recessions since 1961. The longest recession occurred over 1991 and 1992, mainly as result of a global economic downturn.2

There have been two recessions since 1994. The first, in 2008–2009, spanned three quarters as the country became caught up in the global financial crisis.

The most recent occurred over the last quarter of 2016 and the first quarter of 2017. By the second quarter the South African economy was out of recession, with agriculture being the prominent industry aiding recovery, spurred on by increased crop production after the drought.3

The Crop Estimates Committee (CEC) is estimating a record crop for 2017. The CEC expects the country to produce 16,7 million tonnes of commercial maize in 2017, more than double than last year’s harvest, and higher than the current record of 14,7 million tonnes produced in 1981.4

Stats SA will publish updated GDP figures for the third quarter of 2017 on 5 December 2017 at 11h30. So watch this space to see how the economy is doing. 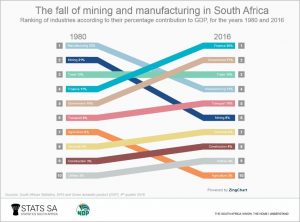 At current production levels, South Africa has only 39 years of accessible gold reserves remaining, whereas the country still has 335 years of platinum group metal reserves and 256 years of coal reserves. This is according to Stats SA’s latest Environmental Economic Accounts Compendium.5

Once the world’s top producer of gold, dwindling gold reserves have implications for future policies related to the economy, mining and employment.

The influence of mining, as well as manufacturing, on the economy has waned over the decades. Manufacturing was the largest industry in 1980, contributing 22% to GDP. In other words, for every R100 of value add that the South African economy produced that year, R22 was due to manufacturing. By 2016, its contribution had fallen to 13%.

Agriculture also slipped in economic ranking to fall from seventh to tenth place, contributing 2% to GDP in 2016.

As the primary and secondary sectors of the economy have waned, tertiary industries have taken centre stage. The most notable climber in the graphic above is finance and business services, rising from fourth place in 1980 to become the largest industry in 2016. Government is not far behind, rising in the ranks to take second spot. 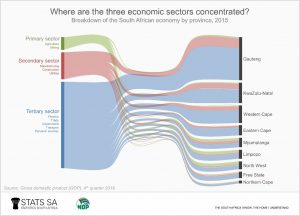 The cosmograph above (click on the image to enlarge) provides a perspective on the size of the country’s three sectors as well as the provincial economies. Tertiary sector activities are concentrated in Gauteng, KwaZulu-Natal and Western Cape. The same three provinces host the bulk of secondary sector activities, which include manufacturing, construction and utilities. The primary sector is the smallest, concentrated in provinces such as Mpumalanga, Limpopo and North West.

Gauteng is the largest economy, having contributed R34 for every R100 of national economic production in 2015. KwaZulu-Natal comes in second (R16), followed by Western Cape (R14).

Water is a vital resource for the economy. No water, no agriculture. No agriculture, no food. Yet the expansion of agriculture, as well as other industries, which are often harmful to rivers, presents us with trade-offs that need to be carefully weighed. Feeding our dams with precious water, our river ecosystems carry life into our fields, homes and factories.

The National River Ecosystem Accounts for South Africa discussion document shows that our rivers were worse off in 2011 than they were in 1999.8 The Ecological Condition Index (ECI), introduced for the first time as a pilot index in this document, provides an indication of overall ecological health on a scale from 0 to 100, where 100 is the reference condition prior to human modification, and 0 is where natural ecosystem function has become totally lost. 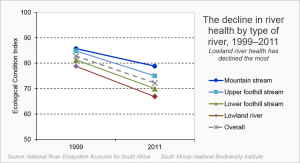 River health declined overall, with the ECI falling from 83 in 1999 to 72 in 2011. The graph shows that lowland rivers have borne the brunt of the decline, exhibiting the largest drop in the ecological index compared with other river types.

The Limpopo Water Management area experienced the most dramatic fall, with its ECI dropping by 21 points, from 83 in 1999 to 62 in 2011. The evidence suggests that increased pressure from mining activities and agriculture in that region, as well as poor waste water management, contributed to the decline.

The state of the economy has an impact on your life, as well as on the lives of others living in your home and in your community. Stats SA will continue to provide a wide range of economic statistics. As the United Nations has stated for African Statistics Day 2017: “Availability and appropriate use of good economic statistics can translate into better lives for people through providing evidence as a base for policy and decision-making by the nation or by firms, households, and citizens.”

7 Your job, your economy, your province (read here).