Agriculture and finance help lift SA out of recession

After two consecutive quarters of decline, the South African economy spluttered back to life in the second quarter of 2017. Positive contributions to higher economic activity across most industries – in particular agriculture, finance and mining – lifted the gross domestic product (GDP) by 2,5% quarter-on-quarter (seasonally adjusted and annualised).

Agriculture continued to show strong recovery from South Africa’s recent drought, increasing production by 33,6%.1 The rise in the second quarter was mostly driven by a rise in the production of field crops, in particular maize and wheat, as well as increased production of horticulture products such as vegetables. 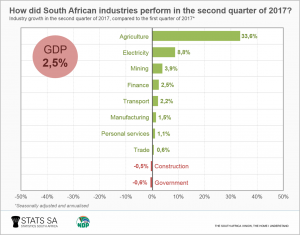 South Africa is on track for record-breaking maize crops if production continues at estimated levels, according to figures from the Crop Estimates Committee (CEC). The CEC expects the country to produce 16,4 million tonnes of commercial maize in 2017, more than double than last year’s harvest, and higher than the current record of 14,7 million tonnes produced in 1981.2

The bumper crop has already provided some relief for cash-strapped South African households. Higher stocks of maize and wheat have begun to dampen prices, with bread and cereal prices falling month-on-month for six consecutive months, according Stats SA’s most recent consumer price figures (February to July).

The finance industry was the second largest contributor to GDP growth in the second quarter of 2017, growing by 2,5% on the back of higher activity in financial intermediation and auxiliary activities.

The mining industry expanded by 3,9% on the back of increased production of coal, gold and ‘other’ metal ores such as iron ore and manganese ore. This is the second consecutive quarter of growth for mining, although production was more subdued than the 13,1% growth recorded for the first quarter of 2017.

Other notable features of the second quarter include positive growth in manufacturing (1,5%) after three consecutive quarters of decline, and a strong rebound in electricity, gas and water (8,8%).

Although the headline figure is the most publicised in the media, the key lesson is that it should not be used in isolation. There are other GDP indicators that complement the headline figure, and taken together they provide a more comprehensive picture of economic performance.4

So even though 2,5% might seem like an impressive recovery, longer-term indicators show subdued growth. As a nation, the goal of achieving and sustaining higher rates of economic growth and development remains just as important as ever.

1 Unless otherwise stated, growth rates are quarter-on-quarter, seasonally adjusted and annualised, and in real (volume) terms.

4 A more detailed discussion on the various ways in which GDP is measured is covered here.